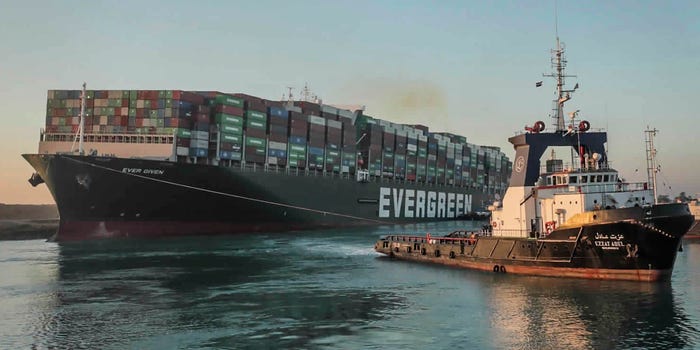 TAIWAN : French reinsurance company SCOR said that Ever Given claims could amount to more than US$2 billion, while they believe it will take many years to settle the claims and the process will include much debate about who is liable, as the issue of responsibilities and applicable laws in global maritime world is complex.

Ever Given is maybe the most famous container vessel in the world after its serious accident in the Suez Canal on 23 March 2021. The ultra-large container ship entered the Suez Canal to make a crossing that would normally take anywhere between 11 and 16 hours.

Instead, a sandstorm, poor visibility, strong south wind and some miscommunication led to the vessel grounding that blocked the busy canal. The ship slipped from one side to the other, finally lodging sideways across the canal and blocking the route.

“The big lesson is that some sand and wind can potentially cause a tragedy of global proportions. This demonstrates the fragility of our economic and social models,” commented Sylvain Gauden, chief underwriting officer, Marine and Energy, Reinsurance at SCOR.

In the Ever Given incident, matters are complicated by the fact that the parties involved, the shipowner, the charterer, the owners of the goods, and even the Suez Canal, have insurance policies originating from all over the world, according to SCOR.

While all seek to recover at least some of their losses, the claims include different types of damages and losses, such as physical damage to the Ever Given, loss of revenue on the part of the Suez Canal Authority, the cost of the salvage operations and business interruption for owners and charterers of the blocked vessels, loss of perishables and cargo delays, as well as damage to the canal itself.

“Understanding the consequences of such an event means taking a holistic view,” said Gauden, adding, “Who are the stakeholders? Which insurance policies can respond? What is their exposure? How much is this going to cost? All branches of marine insurance are concerned, and the interests are multiple and sometimes divergent.”