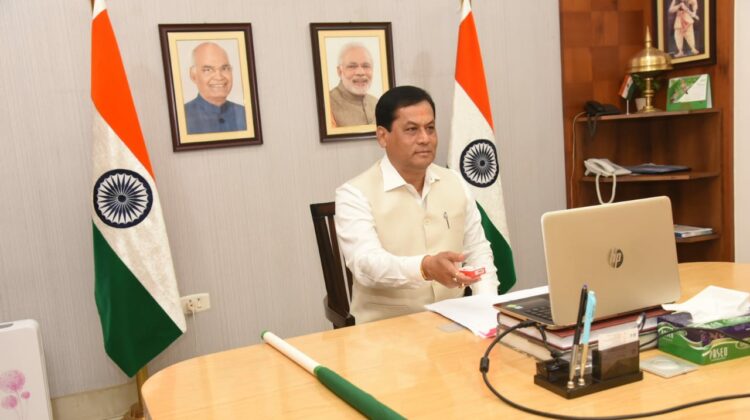 NEW DELHI : Gati Shakti, unprecedented Infra boom, multi-modal connectivity seamless integration of works have been giving new speed to New India in the last 8 years under the leadership of Prime Minister Shri Narendra Modi. India has enhanced its engagement with South-East Asia for the prosperity of all. As Prime Minister says, the destiny of the world will be shaped by the course of development in the Indo-Pacific.

With an emphasis on Reform, Perform and Transform various interventions were made by the Ports for Ease of Doing Business. India’s ranking in Trading Across Borders improved from 132 in 2014 to 68 in 2020. The cargo handling capacity of the Major Ports doubled to 1560 Million Metric Tonnes Per Annum (MMTPA) from 800 MMTPA in 2014. The cargo handling capacity of the Non-Major Ports also increased to 1000 Million Metric Tonnes Per Annum (MMTPA) from 689 MMTPA in 2014. Turn Around Time of Vessels (Container) reduced substantially to 26.58 hours in 2021 as compared to 43.44 hours in 2014. The average Draft in various ports also improved from 12.5 metres in 2014 to 14.5 metres in 2021. The plan is afoot to increase it to 18 metres by 2030 to enable the ports to handle capsize and bigger vessels. The dredging cost per annum, which was Rs 2500 crore has been substantially reduced to Rs 819 crore per annum due to several policy interventions for improving business practice and transparency in administration. The total Operational Income of the Major Ports also increased from Rs 9,162 crore in 2014 to Rs 14,690 crore in 2021. The number of cruise passengers also increased manifold since 2014 – from 1,07,267 in 2014 to 4,68,000 in 2020. All the Major Ports of India provided uninterrupted round-the-clock service during the pandemic times which ensured that Supply chains of goods and essential items were not disrupted. Signing on and signing off facilities to sea-farers was provided by Indian Ports while stopped all across the globe.

In various Reform initiatives, Major Port Authorities Act, 2021 replaced the Major Port Trusts Act, 1963. The legislation empowers the Major Ports to perform with greater efficiency on account of increased autonomy in decision-making and by modernizing their institutional framework. Merchant Shipping Act, 1958 to be replaced by the proposed Merchant Shipping Bill, 2016 aims to usher in significant reforms and promote ease of doing business, transparency and effective delivery of services, augment Indian tonnage. The Marine Aid to Navigation Bill, 2021 will benefit the contracting Parties and Members, other international organizations and their member States. To reduce arbitrations and litigation in the sector, the new Model Concession Agreement (MCA) was launched on 21st November 2021.

A new milestone was achieved in regional connectivity when Pandu Port in Guwahati received MV Lal Bahadur Shastri, the cargo vessel carrying 200 metric tonnes of foodgrain from Patna, by traversing 2,350 km through the Indo-Bangladesh Protocol (IBP) route. Another vessel MV Ram Prasad Bismil, with two barges – Kalpana Chawla and APJ Abdul Kalam– completed their voyage from Haldia with a consignment of 1,800 metric tonnes of steel from Haldia sailing through the Indo-Bangladesh Protocol route to Pandu Port at Guwahati. In line with the Act East policy of the Prime Minister, we have taken up several infrastructure projects on National Waterways-1, Indo-Bangladesh Protocol route, and NW2, through the Inland Waterways Authority of India (IWAI). Jal Marg Vikas Project (JMVP) on National Waterways (NW)-1 (Ganga- Bhagirathi-Hooghly river system) and Jal Marg Vikas Project -II (Arth Ganga) on NW 1 with an investment of Rs 4,634 crore (in collaboration with the World Bank) are being taken up for capacity augmentation.

Digital initiatives to transform Major ports into ‘Smart Ports’ which will be data-driven, using automated devices, Internet of Things (IoT), and leverage analytical technologies for safer and more efficient management are being carried out.

The Paris Climate conference in 2015 (COP 21) has prescribed targets for lowering CO2 and other emission limits within the Marine industry. Electric/ hybrid vessels, Alternate fuels etc., will become the norm – especially for near-shore/ coastal/ inland waterways vessels. National Hydrogen Mission announced by our Prime Minister last year focuses on implementing hydrogen fuel in India which has a significant Maritime component also. Such initiatives are setting platforms for various alternative fuels and sustainable solutions across all sectors.