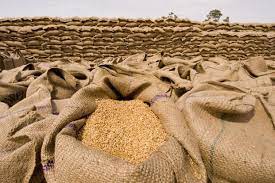 NEW DELHI : India put wheat export under “prohibited” category post a sudden spike in the price of the commodity.
In a notification on Saturday, the Centre backed the move saying it was being done to manage overall food security of the country and support neighbouring and vulnerable countries.

Exports , however, will be allowed on basis of permission granted to other countries to meet their food security needs and based on the request of their government, the Centre added in its missive.

Local prices of wheat and atta have risen sharply as India has stepped up exports of the cereal following a nearly 40% rally in global rates in the wake of the Russia-Ukraine conflict.

This year’s wheat production is pegged at 95 million tonnes (mt) by traders, against government estimates of 105 mt, likely tightening local supplies and causing prices to rise. Wheat is priced at Rs 2,550 per quintal (100 kg) at Kandla port, having risen sharply recently as exporters are trying to speed up shipments, anticipating curbs by the government.

Minimum support price (MSP) for wheat procurement is Rs 2,015 per quintal. Retail inflation in wheat and atta spiked to 9.59% in April, from 7.77% in March. The government’s wheat procurement has fallen nearly 55% as open market prices are higher than MSP.

After the war hampered logistics in the Black Sea region, which accounts for about a quarter of all wheat trade, India has tried to fill the vacuum.

Egypt, the world’s top buyer, recently approved India as a source for wheat imports. Last month, Shri Piyush Goyal, the Food and Commerce Minister, said India hopes to become a permanent exporter of wheat, shipping as much as 15 million tons this year, compared with about 7.2 million in 2021-22. Officials are pushing the World Trade Organization to relax rules so that India can export from state reserves, Goyal said.

Hundreds of acres of wheat crops were damaged during India’s hottest March on record, causing yields to potentially slump by as much as 50% in some pockets of the country.

Franck Gbaguidi, senior analyst at political risk consultancy Eurasia Group, said damage to crops will limit India’s ability to fill broader supply shortages, regardless of whether exports move forward or not. “With the current impact of the heat waves, India’s claim to ‘feed the world’ by exporting wheat surpluses — if granted permission by the World Trade Organization — now rings hollow,” he said.

In an online briefing, RBI Governor Shaktikanta Das said inflation pressures are becoming more acute, particularly on food. Retail prices for wheat averaged about 29 rupees a kilogram on May 5, up around 7% from a year earlier. And flour made from the grain traded at close to 33 rupees, an 8% rise from last year, according to government data.

Minister of Ports, Shipping & Waterways and AYUSH to inaugurate FFFAI Convention in Chennai

India-UK wish to conclude FTA by end of October