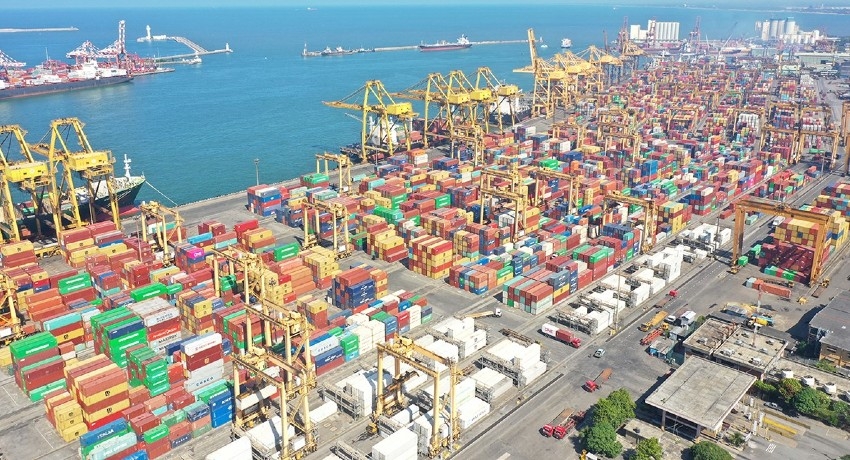 COLOMBO : Three international liners have omitted the Colombo Port, due to the current economic crisis and have reported this to their customers in Colombo on 6 April, despite the fact that the Sri Lanka Ports Authority having denied that there is congestion due to delays or that the US dollar crisis is hampering Port operations.

The Port Omission Notification Customer Service Unit Of OOCL (Korea) said “We are sorry to inform you that the subject vessel: OOCL BRAZIL 022W, OOCL HAMBURG 135W, OOCL LUXEMBOURG 095W will omit Colombo port due to the current crisis in Sri Lanka. We hope you would understand that the coastal schedule change is beyond our control and we are sorry for any inconvenience caused.”

However, Managing Director of the Sri Lanka Ports Authority (SLPA) Upul Jayatissa said these ships may be omitting the port not because of congestion, but their companies’ decisions could be the reason too. The Harbour Master or the Ceylon Association of Shipping Agents were not available to find out why these ships had omitted Colombo.

However, the Colombo Port was reported to have significant truckload service issues in the past several months as a result of large-scale gasoline stock outs in Sri Lanka, the latest symptom of the island nation’s deteriorating economic woes. Because Colombo is South Asia’s main transshipment hub, this could put even more strain on container lines, which already have record-low schedule reliability. Due to a vehicle shortage, Colombo terminals are experiencing significant container backlogs.

Meanwhile, a maritime website revealed on 6 April that more ships have been turning to Indian ports in recent months as a result of political and economic uncertainty in Sri Lanka, as well as congestion at the Colombo port. According to industry groups, the website said, roughly 5-10% of regular traffic from Colombo has been diverted to Indian ports in the last month, with Chennai, Ennore, Mundra, and Thoothukudi’s VO Chidambaranar Port benefiting the most. Due to the situation in Sri Lanka, traffic at the Kochi International Container Transshipment Facility (ICTT) in Vallarpadam, India’s first transshipment terminal, increased by 62% to 13,609 twenty-foot equivalent units (TEU) in March 2022, compared to 8,394 TEU in March 2021.

However, the SLPA Chairman said that the Port operation is going smoothly and refuted claims of congestions.

He sent a clarification statement to the website Maritime Gate that Sri Lanka Ports Authority said there is no traffic ‘congestion’ at any of the terminals at the Port of Colombo and all operations are conducted efficiently with increased productivity and he refuted the claim of a website that said “more ships have been turning to Indian ports in recent months as a result of congestion at the Colombo port”.

According to statistics at the Sri Lanka Ports Authority (SLPA), the daily container handling (TEUs) at the port of Colombo (POC) has reached an increase of 6.1%. With such increase, according to Alpha Liner Index, POC has also moved up one notch in the world’s best port ranking to 22nd this year, according to the Chairman Dr. Prasantha Jayamanna.

With joint marketing strategies, last year, the  Port of Colombo (POC) recorded its  highest ever annual container throughput.  The total volume handled by the POC reached 7.25 million TEUs reflecting an increase of 5.8% against the corresponding volume of 6.85 million TEUs in 2020. Transshipment grew by 4.2 per cent to 5.85 million TEUs.

“Accordingly, SLPA much appreciates if ‘Maritime Gateway’ could bring out the facts with regard to the Port of Colombo in the aforesaid news release with recognised sources of information rather than merely mentioning, “According to industry groups,” that in the real scenario tarnishes the credibility of the news content and is apparently inaccurate and not true on what is said about the Port of Colombo (POC). Sri Lanka Ports Authority (SLPA) wishes that “maritime gateway”, honouring  the ethics of right to accurate information would  offer the due and same publicity to what has been presented herewith responsibly by SLPA as the terminal and port operator of the POC.”

The website further noted that, “the Colombo port is almost at a standstill. There are no trailers to evacuate containers and cargo from the port. In the last one month, we are seeing a considerable shift in normal traffic to the ports in Tamil Nadu — Thoothukudi and Chennai, due to the congestion in Sri Lanka,” said, S Narasimhan, President, India-Asean-Sri Lanka Chamber of Commerce and Industry. Narasimhan said, he expects more traffic to get diverted to Kochi transshipment terminal and ports in Tamil Nadu in the coming months.