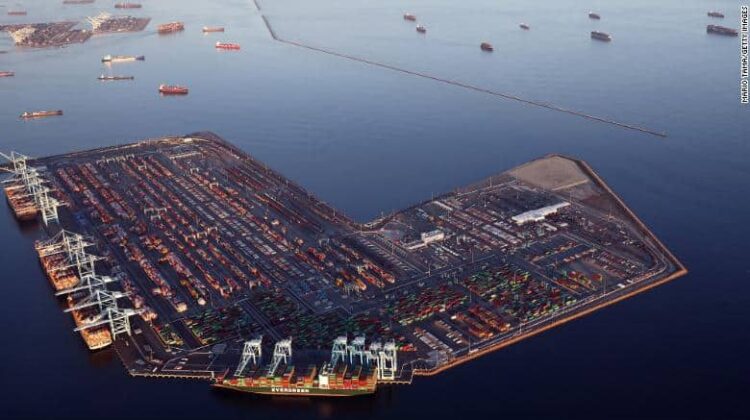 The global supply chain issues the Federal Reserve has been worried about plagued the country’s busiest ports last year. A new report from the World Bank and S&P Global Market Intelligence ranked the efficiency of more than 350 ports worldwide based on how long ships had to wait at port last year. Los Angeles and Long Beach ports, which handle more than 40% of all maritime imports to the U.S., came in dead last for efficiency.

Most of the other big ports in the U.S. — New York, Savannah, Oakland — were also in the bottom half of the list, behind top performers in Persian Gulf countries and Asia.

Last year was not a normal year. U.S. ports processed record amounts of imports as Americans stuck at home took to shopping. There were some bigger structural differences too, said Nick Vyas, a Professor of Supply Chain Management at the University of Southern California.

“There’s a huge labor union participation in what actually occurs at the ports and what doesn’t,” Vyas said.

He said U.S. ports generally don’t operate around the clock, unlike some of the top-performing ports on the list.

Last fall at the height of the shipping backlog, President Joe Biden moved LA and Long Beach to 24/7 operations, but that didn’t totally solve the problem, said to John Martin, founder of Martin Associates, a transportation consulting firm.

“There was no space on the terminal, because you couldn’t get the containers out the gate,” Martin said. The port complex has little room to expand, and warehouses in Southern California are strapped for space and the needed workforce to receive shipments around the clock.

“You’re looking at warehouse vacancy rates less than 1%, which is unheard of,” Martin said.

But there are many efficient ports, particularly in Asia and Europe, that have even tighter constraints on space, according to Christopher Tang, a professor of Supply Chain Management at UCLA.

Those ports use more sophisticated technology to quickly move cargo in and out — automated cranes, sensors, tracking — all powered by artificial intelligence.

“We are really way behind. By decades. I’m not joking. We are way behind,” Tang said.

The bipartisan infrastructure bill is putting $17 billion towards port upgrades.