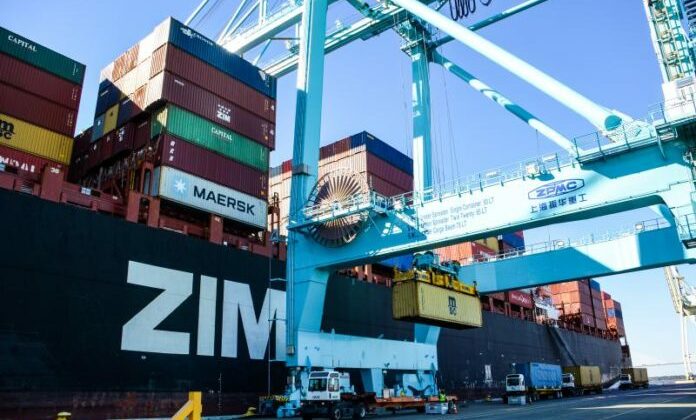 HAIFA : Zim, the world’s tenth largest container shipping line, posted the best quarterly results in its history recently. It hiked its full-year guidance and now predicts 2022 earnings will be around 20% higher than in 2021. And yet, shares of Zim — by far the largest U.S.-listed shipping company by market cap — fell as much as 8% in the hours after its earnings release.

The record results from Zim came on the same day as a 25% plunge in shares of Target and a 1,165-point drop in the Dow amid investor fears of inflation and rising retail inventories.

Ample retail inventories imply reduced import demand, a negative for container freight rates. Inventories are up 43% year on year at Target, 32% at Walmart and Home Depot , and 10% at Lowe’s .

Throughout the pandemic era, Israel-based Zim has boosted quarterly revenues at a much faster pace than its larger competitors.

Zim has outpaced its much larger container shipping rivals by concentrating more of its fleet on higher-paying markets like the trans-Pacific, by keeping more of its capacity in the spot market than some other carriers do, and by growing its fleet more quickly.

Maersk and Hapag-Lloyd cover a much more diversified range of container shipping trades than Zim does and have higher contract coverage. As a result, Zim’s first-quarter average rates were 69% higher than Maersk’s and 39% higher than Hapag-Lloyd’s.

Cargo volume is the other key driver of Zim’s revenue-growth outperformance.

Maersk and Hapag-Lloyd have low fleet growth in percentage terms (off a much larger base), and much of the incremental capacity has been offset by port congestion. Zim has dramatically expanded its fleet size off a small base over the past two years, primarily by leasing ships. The more ships Zim leases, the more revenue it generates in the near term (and more risk from lease costs it faces in the medium term).

Last year, the story of container shipping’s boom was largely focused on spiking spot rates. This year, attention has turned to contract rates.

The thesis that 2022 container shipping profits will top 2021 profits goes like this: Spot rates, even though they’re on the decline, will end up much higher on average for the first half of this year compared to the first half of last year. Second-half spot rates will probably fall year on year, offsetting some of the gains in the first half.

But even if second-half spot-rate declines are extreme, contract rates should come to the rescue. In the trans-Pacific trade, annual contracts often run from May 1 to April 30. Contract rates during the first half of 2022 (signed last year) are much higher than the previous annual rates. And the new contracts that started May 1 are up sharply yet again, which should buoy average rates (including both contract and spot) in the second half of 2022.

Maersk has 71% of its 2022 volumes on contract, Hapag-Lloyd 50%. A little over 25% of Zim’s global business is on contract, including 50% of its trans-Pacific business.

During Wednesday’s call, Zim CEO Eli Glickman confirmed that contract rates for this year have more than doubled.

Zim increased guidance for full-year earnings before interest, taxes, depreciation and amortization to $7.8 billion-$8.2 billion (up from $7.1 billion-$7.5 billion previously, or by $700 million at the range midpoints). “The main reason for the improved outlook is better than initially anticipated contract rates,” said Zim CFO Xavier Destriau. “Those contract rates kicked in on May 1, so that will largely impact Q3 and Q4.”

Destriau said that Zim’s guidance assumes “spot rates would start to normalize in the second half and to some extent, the reduction in the spot market would be offset by the incremental revenue we generate on the contract cargo compared to last year.”

As spot rates pull back, the market focus is turning toward how spot rates compare to contract rates. Historically, if spot rates fall too far below contract rates, cargo shippers switch volume to spot, given that most annual contracts are not legally binding.

Xeneta reported during a webinar on Tuesday that Asia-East Coast spot rates are already below contract rates.

Xeneta’s data also shows that the spot-to-contract rate gap in the Asia-West Coast trade narrowed dramatically between mid-March and mid-May.

Destriau confirmed that the average rate of Zim’s trans-Pacific annual contracts starting in May “is not that far off from where the spot rate is today.”