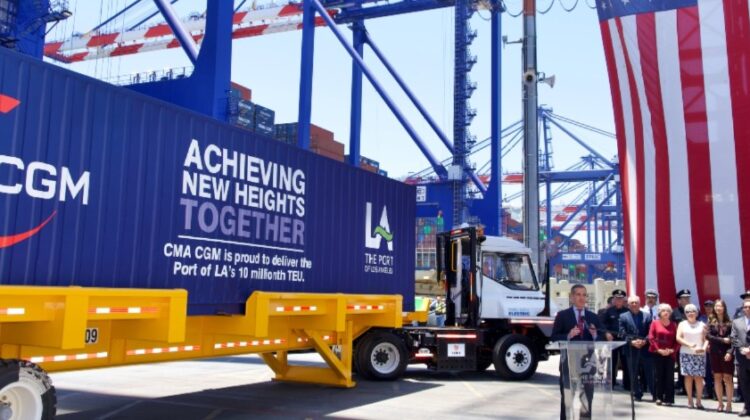 To mark the milestone, Los Angeles Mayor Mr. Eric Garcetti, longshore labor leaders, port officials and Mr. Ed Aldridge, President of CMA CGM America, gathered at the Port of LA’s Fenix Marine Terminal to watch the 10-millionth container loaded onto the CMA CGM AMERIGO VESPUCCI. The event was also fed via satellite to media outlets and live streamed from the Port of Los Angeles and Mayor Garcetti to more than 300,000 followers on social media.

A symbol of CMA CGM’s unwavering support of its export customers
The contents of the record-setting CMA CGM container perfectly illustrate the Group’s commitment to U.S. exporters. Shipped by The DeLong Company, America’s number-one exporter of containerized agricultural products, the container is filled with soybeans—a prime U.S. export that ranks number two in world supply.

Throughout the peak in demand, CMA CGM has diligently continued to support exporters with its flexible and agile operating solutions. The Group has added an additional 330,000 TEUs of capacity to its dry container fleet and 42,000 TEUs of reefer capacity to ensure America’s exporters have access to the equipment they need to get their products to market.

Mr. Ed Aldridge, President of CMA CGM and APL North America, stated, “As the Port of Los Angeles’ largest ocean carrier, the CMA CGM Group ships thousands of containers to and from California every day. But today’s historic TEU––number 10 million for the Port––carries more than just cargo, but hope. It shows that, as the pandemic subsides in the United States, the American economy is roaring back to life. CMA CGM is committed to delivering the essentials that keep the country moving as well as proposing agile logistics solutions to its customers. We look forward to continuing to work with the Port of Los Angeles to deliver the goods Americans need to return to normal.”

The Port of Los Angeles has ranked as the number-one container port in the United States each year since 2000. In 2020, the Port moved 9.2 million TEUs, the fourth highest-volume year in the Port’s history. The Port’s previous highest annual container volume on record was in 2018, moving 9.5 million TEUs.