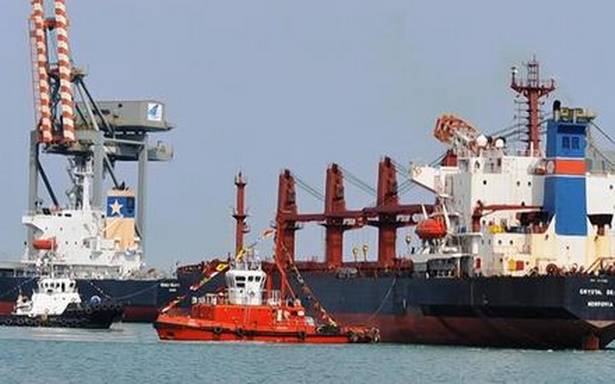 VISHAKHAPATNAM : A six-member Empowered Group of Secretaries formed to oversee the divestment of the Andhra Pradesh Government’s 10.4 per cent stake in Gangavaram Port Ltd (GPL) to Adani Ports and Special Economic Zone Ltd (APSEZ) has its task cut out.

The secretaries group led by Mr. Neerabh Kumar Prasad, Chief Commissioner of Land Administration and Special Chief Secretary to the Andhra Pradesh Government, “shall follow the available guidelines and the recommendations of SBI Caps” while implementing the process of disinvestment and the merger of GPL with APSEZ which were approved by the state cabinet on May 4, according to a June 4 order issued by the State government.

The recommendations of SBI Caps may also be examined by the committee to arrive at a specific share value of the government stake proposed to be transferred to APSEZ, duly following the procedure on disinvestment, the June 4 order stated.

Since the State government does not have a policy on divestment, the SBI Caps had recommended that “the government of Andhra Pradesh should go in for disinvestment as per the guidelines of disinvestment policy of GoI (Central government) for a better price discovery and negotiations”.

The Central government’s divestment policy follows a two-stage process – qualification of parties who had filed their expression of interest followed by a financial bid with the entity offering the highest bid winning the deal.

The secretaries panel, in this case, is faced with a piquant situation: the buyer of the government’s shares has already been identified without following any process.

APSEZ approached the government with a proposal to buy its 5,37,31,700 shares (10.4 per cent stake) at ₹120 a share. This was the price at which APSEZ acquired the 89.6 per cent stake from the original promoter of the port, DVS Raju and family, and private equity firm Warburg Pincus LLC.

SBI Caps had suggested fixing the price for the government’s share at 20 per cent above the ₹120 a share proposed by APSEZ.

In the government’s scheme of things, it doesn’t work that someone comes forward with a proposal to buy the State’s shares at a pre-determined rate just because this was the rate it had “finalised privately” to buy the shares from the other stakeholders of the port.

This is fraught with huge political risks, particularly because the government’s stake is in lieu of 1,800 acres of land given to the port.

In carrying out the task given to it by the government, the secretaries panel would do well, by first framing a divestment policy, get it approved by the State cabinet ahead of proceeding with the stake sale as per the policy guidelines. Without such a policy, the stake sale is bound to suffer from allegations of foul play and help absolve it from any missteps.

The secretaries panel will also have to examine the need to merge Gangavaram Port Ltd (GPL) with APSEZ following which APSEZ will float a new special purpose company to run the port for the balance period of the concession as approved by the cabinet on May 4.

Government sources said that merging GPL (which is partly a government company) with APSEZ could face legal hurdles as the port has to be transferred back to the government at the end of the concession period.

All eyes are now on the empowered group as it starts work on the merger and government stake sale in Gangavaram port.