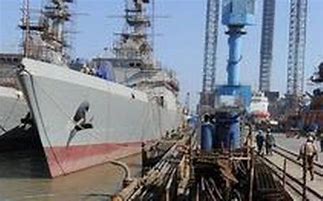 The Committee of Creditors (COC) led by IDBI Bank is slated to meet later this week to evaluate the offers, multiple sources said.

APM Terminals is the container port operating unit of Danish transport and logistics giant AP Moller-Maersk Group A/S. It runs a private port at Pipavav, which sits next to the shipyard.

GMS Inc is the world’s biggest cash buyer of ships for recycling.

RNaval is being sold under the Insolvency and Bankruptcy Code (IBC) to recover unpaid dues of ₹10,878 crore of financial creditors.

Operational creditors have claimed another ₹1,922 crore from the company, of which only ₹485 crore has so far been admitted. The entire debt of RNaval is being transferred to National Asset Reconstruction Company (NARCL). The resolution of RNaval debt will take place through NARCL.

Russia’s state-owned United Shipbuilding Corporation, one of the strong contenders, backed out of the process without placing a bid citing lack of clarity on new naval contracts, a source with knowledge of the matter said.

“In the absence of any clear visibility of business from the government, United Shipbuilding felt it didn’t make any sense to bid for RNaval,” the source added.