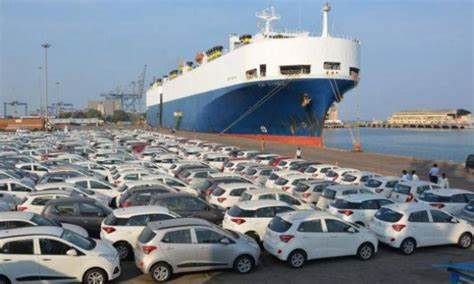 MUMBAI : At a time when domestic auto sales have been choked by Covid-19, Indian manufacturers finally have something to cheer about: the export market. According to data from SIAM (the Society for Indian Automobile Manufacturers), India’s total auto exports in the first quarter of fiscal 2021-22 (Q1, from April to June) was 1.4 million units, over three times the figure in the same period in the previous year. Two-wheeler manufacturers saw an especially large boost, exporting about 1.1 million units in this period, compared to 337,983 units a year ago. With the industry having seen major disruptions over the past year and a half due to Covid lockdowns and cutbacks on discretionary spending by consumers, this has proved a major relief.

As a matter of fact, export figures for two-wheelers in Q1 2021-22 were better even than figures from pre-Covid times, higher than exports in the previous three years (see graphic Outward Bound). Exports of passenger vehicles in Q1 2021-22 totalled 127,115 units, up from 43,619 in the same period in 2020-21. “Exports this year will definitely be better than last year, since many countries we export to did not go through the strict lockdowns that India has seen,” says R.C. Bhargava, chairman of Maruti Suzuki. His firm shipped the most passenger vehicles during this period—45,056 units—followed by Hyundai Motors India, which shipped 28,881 units.

However, though passenger vehicle sales were better in Q1 2021-22 than in Q1 2020-21, the figures lag behind those in Q1 2019-20 and Q1 2018-19. As a result, industry experts are adopting a wait-and-watch attitude before commenting on whether this year’s figures indicate a long-term trend. “Although the regional lockdowns prevented companies from selling in India since most dealerships were closed, many states allowed companies to export,” says Rajesh Menon, director general of SIAM. “We will have to wait and see whether the uptick in sales is specific to the first quarter of the current fiscal year or whether it is a sustainable trend.” Exports as a percentage of production were the highest in Q1 2021-22—about 31 per cent—compared to the corresponding quarters in the previous three years.

A rising tide lifts all boats

The Ministry of Commerce and Industry has said that auto exports in the first half of calendar year 2021 increased nearly 50 per cent over last year in value terms, to $23.61 billion (Rs 1.7 lakh crore). This, it added, is the best auto exports performance since the first half of 2014, when exports were valued at $25.23 billion (Rs 1.8 lakh crore). Agencies quoted a ministry official saying the increased exports were due to South Korean auto companies in India increasing their “product competitiveness” despite an overall shortage of auto components. Sales of passenger cars from the Indian arms of South Korean firms Hyundai Motor and Kia in the US market increased by 48 per cent in the first half of this year on a year-on-year basis, breaking the highest sales record of both companies. Apart from the US, other major export destinations for Indian auto firms include West Asia, Latin America, Africa, Oceania (comprising Australia, New Zealand and other countries) and our Asian neighbours. The top two-wheeler exporters include Bajaj Auto, TVS Motor and Hero Motocorp. For FY21, Bajaj Auto and TVS together accounted for 78 per cent of India’s total two-wheeler exports. The major regions for two-wheeler exports include Africa, Southeast Asia, Latin America, the US and Europe.

The improved performance on the auto exports front seems to have had a knock-on effect on the exports of auto components as well. The exports of automobile parts in the first half of calendar year 2021 increased 43.6 per cent year-on-year to $11.61 billion (about Rs 86,000 crore). “The performance of the auto component industry usually mirrors the vehicle industry, even a tad better,” says Deepak Jain, president of industry body ACMA (Automotive Component Manufacturers Association). “We have seen exports as well as aftermarket sales continue to have an uptick.”

One of the reasons for the focus on exports is that domestic vehicle purchases have been hit by regional lockdowns. “Retailers don’t want to carry too much inventory. We are hoping that when restrictions are eased, there is some pent-up demand and a continuous recovery to bring sales back to sustainable levels,” says Jain. In fact, several global auto companies had plans to make India a key hub for sourcing automotive components after supplies from China, a major supplier of auto parts, had been hit by the Covid-19 pandemic. Called the ‘China plus One’ strategy, this would have been immensely beneficial for India, which currently contributes only around 1.5 per cent to the global components value chain. As much as 50 per cent of India’s overall component exports are to quality-conscious markets in the US and Europe. Some of AMCA’s member companies have said that they are derisking from China, but Jain points out that boosting exports is not an overnight game.

The components industry is also awaiting details of the Centre’s production-linked incentive (PLI) scheme. Under this, the Centre has announced a package of Rs 57,042 crore for the auto and auto components sectors to provide incentives to increase manufacturing and cut down import bills. Jain believes the scheme will boost both domestic production and exports. With the incentives, ‘automotive suppliers can leverage their strengths, including their competitive costs, process expertise, high quality and innovation focus, to pursue international growth and leverage the recent tailwinds’, said consulting firm McKinsey in a March 2021 study.

In February, Maruti Suzuki said it had drawn up a plan to boost its exports to Africa and Latin America and had plans to launch a flurry of new models in those regions. Europe is another major export destination for Maruti, as are Indonesia, South Africa and Sri Lanka. Reports say the company’s cars, including the Alto, the Baleno, the Dzire and the Swift are popular choices in these markets. In January, the company started production and export of Suzuki’s compact off-roader, Jimny. Although meeting domestic demand was its priority, Maruti, whose exports accounted for only six per cent of its total production in 2020, had plans to use the excess capacity at its third manufacturing line in Gujarat to pursue exports and take it to 20 per cent of the total production in future.

Hyundai, meanwhile, has plans to develop India as one of its global hubs for parts and vehicles and also to increase the procurement of parts for its factories in South America and Eastern Europe from India. Last year, Kia Motors, which entered India in 2019, said it is planning to use India as an export hub for its compact sports utility vehicle, the Sonet, and other models. Other key exporters from India include Ford India, Nissan Motors, Volkswagen India and General Motors.

Gaurav Vangaal, an associate director with IHS Markit, an information and analytics firm, says OEMs (original equipment manufacturers, as auto-makers are called in industry parlance) are considering India as a manufacturing base for vehicles powered by internal combustion engines in the coming years as globally, there is a shift in favour of electric vehicles.

Most experts say that India has the right kind of opportunities coming its way in vehicle production and exports as well as in auto parts, but the country needs to be far more competitive than it is today in order to attract more investment from global players. While several auto-makers have announced intentions to make India a manufacturing and exports hub, there is a long way to go before they can actually translate their plans into reality.