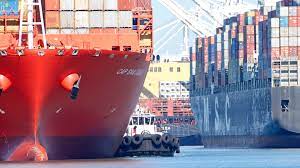 CALIFORNIA : Peak shipping season is coming soon — and the “parking lot” of container ships stuck at anchor off the coast of California is still there, with Oakland surpassing Los Angeles/Long Beach as the epicenter of congestion.

Shipping giant Maersk warned in a customer advisory on Wednesday that Los Angeles and Long Beach “remain strained with vessel wait times averaging between one to two weeks.” But it said “the situation is even more dire at the Port of Oakland, where wait times now extend up to three weeks.”

West Coast port delays are having severe fallout for liner schedules. Congestion in California equates to canceled voyages as ships can’t get back to Asia in time to load cargo. Even as U.S. import demand soars, the effective capacity in the trans-Pacific trade is being sharply curtailed by voyage cancellations.

For importers, that means even longer delays, even higher all-in freight rates and a cap on how much can be shipped at any price.

To put current cancellations in context, they are now running at the same percentage that carriers intentionally blanked in Q2 2020 to compensate for the sudden collapse of import demand when U.S. businesses were shuttered by nationwide lockdowns.

Deadline will be missed
Port of Los Angeles Executive Director Gene Seroka has repeatedly said that the San Pedro Bay anchorages need to be cleared before the traditional peak season surge begins. He has voiced a goal of June 1 for “few if any ships” at anchor.

That deadline, which is a week away, will not be met.

The daily number of ships stuck in San Pedro Bay is down from an average of 31.8 in January to mid-March to 21.3 from mid-March to Tuesday. However, the numbers have stubbornly refused to fall further. As of Tuesday, there were still 20 ships at anchor in San Pedro Bay.

Port of LA’s Gene Seroka (Photo: Port of Los Angeles)
Asked about his June 1 target for clear anchorages, Seroka told American Shipper, “Import volume continues to be heavy and consistent, more than we had anticipated earlier this year. Reduction in dwell times is leveling off and the subsequent decline in [ships at] anchorage has slowed. Our goal remains to clear as much of the at-anchorage situation as possible prior to late summer and the start of the traditional peak season.”

Unfortunately, the peak season is expected to begin sooner than usual this year. Time appears to be about to run out — which implies even more congestion.

According to Maersk, “Peak season is expected to start early this year as retailers prepare for a strong back-to-school season that will likely blend into the end-of-year holiday peak season that typically starts in August. This will unfortunately put more pressure on an already stretched network with the potential to cause further disruptions.”