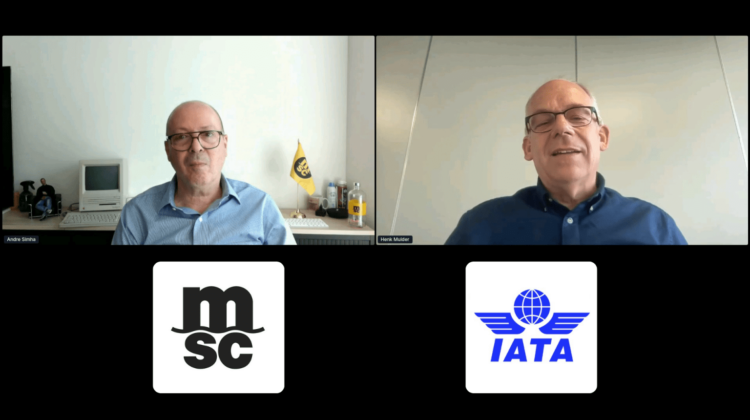 GENEVA : The digitalisation of cargo transportation is an ongoing process, with a host of challenges created by sectoral information silos and disconnected third party stakeholders – but experience has shown that collaboration on standardisation and a willingness among users to demand a common approach from technology platforms can deliver a more efficient and integrated supply chain.

This was one of the key themes to emerge from a special focus session on Cargo’s Digital Future at the Smart Maritime Network Athens conference on June 15, which included a live discussion between Andre Simha, Global Chief Digital and Information Officer at MSC and Chairman of the Digital Container Shipping Association (DCSA), and Henk Mulder, Head of Digital Cargo at the International Air Transport Association (IATA).

While the maritime industry is still in the comparatively early stages of its digitalisation journey, the aviation sector has successfully undertaken a number of major initiatives over the course of the last quarter century to improve its ability to exchange cargo transport data, projects that can provide valuable lessons to those of us in shipping trying to pursue similar objectives.

Airlines dealt almost exclusively in paper documents for most of the twentieth century, before the introduction of EDI (electronic document interchange) processes around the year 2000, built on a series of Cargo Community Systems (CCS) that allowed stakeholders to shift to digital documentation.

In the two decades since, aviation has been able to make further progress in moving towards an API approach, based on digital cargo standards such as the ONE Record. ONE Record is a standard for data sharing developed to create a single record view of a shipment, with a common data model that supports sharing via standardised web APIs.

The ultimate goal for the airlines is to create an integrated ‘Internet of Logistics’ where various parties like airlines, forwarders, airports and other stakeholders can exchange data directly amongst themselves without the need for an intermediary. While maritime may be at a much earlier stage in the journey, this is a goal shared by many in the vessel operations sector, including DCSA.

“The timeline of moving from paper to EDI to APIs, that’s similar to what we’ve done in the maritime industry. The difference is that between 2000, when we started to look at creating some standards with INTTRA, for example, and 2019 when we created DCSA, we had very few standards to allow us or other software companies to build solutions. We also limited the scope to very basic messages, like bookings, shipping instructions, invoices and a couple of other things,” said Mr Simha.

“Aviation has done a great job in managing to get everybody together, create standards and then get them adopted, because that’s maybe the biggest challenge. In our case, the idea behind DCSA was a decision from two container lines, we got together and knew we needed a solution for exchanging information between ourselves.”

“That was the first motivator. And then of course, we looked at the bigger picture, things like ecommerce, upcoming digital platforms, ecosystems and everything that comes afterwards.”

One of the advantages that Mr Mulder believes IATA enjoyed in being able to build a common approach to standards is the long history of the organisation, starting off relatively small and putting foundations in place in its early days so that a legacy of cooperation could be maintained as demands grew and the Association’s numbers expanded.

“We were first founded back in 1929 when there were only a few aeroplanes in the sky, and the idea of an airline had only just been invented. You could just imagine that in those days an airline like Air France, or Swissair or anyone else would only ever have had two or three aeroplanes, small ones.”

“With so few people involved it’s very easy to see how they would get together and agree on how to do business. If you fast forward to today, that spirit has never left the organisation even though right now we have 400 members. There is still a tremendous camaraderie among airlines knowing that they’re doing this together.”

“When the airlines decide they want to do something, like develop a new standard, they start off with a mindset that they’re going to agree, and then once they have agreed they will implement it to the point where some of the decisions as an association are mandatory. When we decide certain things, every single airline has to implement it, or they’ll be asked to leave the organisation.”

While it may seem like a comparatively easier task to broker agreement between the smaller number of large shipping companies involved in standardisation efforts like those being undertaken by DCSA, Mr Mulder notes that this could also be a disadvantage for the maritime sector. The large number of airlines in an organisation like modern-day IATA changes the dynamics of the group to the extent that it almost acts like a democratic body, where the needs of the industry as a whole can supersede the interests of a smaller number of powerful players.

“As you say, it’s not easier because we’re fewer companies, but on the other hand, I think that camaraderie you spoke about, we’ve had it too. At a technical level at least, different from normal commercial competition, I think what we’ve managed to agree upon between us is that technology is not going to be the differentiator,” Mr Simha responded.

“That’s already a positive. In the old days perhaps one of the carriers would have an idea of a new app or a new solution based on some new tech, and then what would happen is they would invest heavily in the R&D and then six months later everybody would copy them. In the end that is not efficient.”

One issue that both Mr Simha and Mr Mulder agree is a key component in building trust among these stakeholder groups, large or small, is remaining technology agnostic when it comes to introducing standards – industry groups can be effective in creating a recommended format but building IT systems to apply those standards and deliver the data should happen in the open market.

“IATA is very deliberately extremely neutral, and whenever we work with solution providers, we either go out to the whole world to say we’re looking for a solution everybody can work with, or better still, we work with multiple solution providers to make sure there’s some competition in the market. I think that is the only way we keep our credibility,” said Mr Mulder.