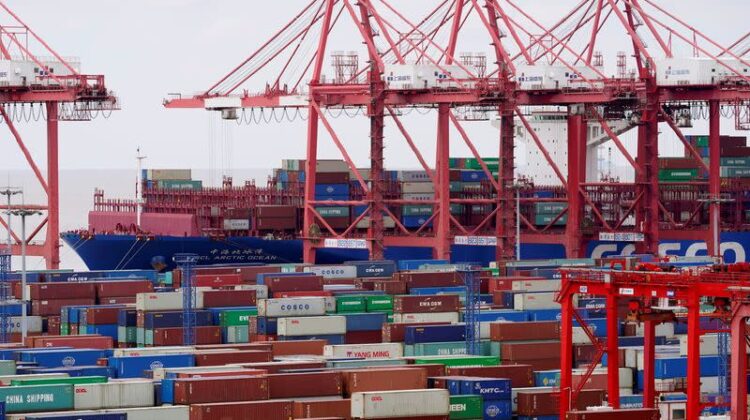 SHANGHAI : China’s imports grew at their fastest pace in 10 years in May, fuelled by surging demand for raw materials, although export growth slowed more than expected amid disruptions caused by COVID-19 cases at the country’s major southern ports.

While a brisk recovery in developed markets has bolstered demand for Chinese products, a global semiconductor shortage, higher raw material and freight costs, logistics bottlenecks and a strengthening yuan have dimmed the outlook for the world’s largest exporting nation.

China’s exports in dollar terms in May grew 27.9% from a year earlier, slower than the 32.3% growth reported in April and missing analysts’ forecast of 32.1%.

“Exports surprised a bit on the downside, maybe due to the COVID cases in Guangdong province which slowed down the turnover in Shenzhen and Guangzhou ports,” said Zhiwei Zhang, chief economist at Pinpoint Asset Management, adding that turnover at ports in Guangdong will likely remain slow in June.

On the ground in Guangdong, factories have yet to report widespread capacity cuts over the outbreak but admitted efficiency issues as they tried to meet overseas demand.

Chen Linsheng, chief operating officer at Anlan, a Shenzhen-based manufacturer of skincare and beauty-care devices, told Reuters while there was no impact on production, staff are now subject to a series of COVID tests and not allowed back into the factory without a negative result.

“We are not allowed going out (of the city). We need to report in advance and cannot even go to Guangzhou or Foshan on our own,” said Chen, adding that a lot of meetings have moved back online.

Besides the impact of COVID cases in Guangdong, the global chip shortage has started to hit all of China’s export items related to semiconductors, said Iris Pang, Greater China chief economist at ING.

Two-year average growth for exports dropped to 23.4% in May from 36.3% in April, pointing to weaker export momentum as the reopening of developed economies reduce demand for personal protective equipment (PPE) and work-from-home (WFH) products, analysts at Nomura said in a note.

At the same time, the currency’s extended rally in recent weeks to near three-year highs against the dollar could further saddle U.S. consumers with higher prices.

Imports increased 51.1% on year last month in dollar terms, the fastest growth since January 2011 but slower than the 51.5% rise tipped by the Reuters poll.

However, that figure — a gauge of import values, not volumes — was partly flattered by hot raw materials prices with demand for commodities such as coal, steel, iron ore and copper driven by easing pandemic lockdowns in many countries and ample global liquidity.

“Once again, supply constraints are partly to blame – inbound shipments of semiconductors continued to drop back,” he said. “So too did imports of industrial metals.”

Indeed, iron ore futures dipped more than 3% on Monday as the trade data cast a shadow over demand prospects.

China posted a $45.53 billion trade surplus for the month, wider than the $42.86 billion surplus in April but less than the $50.5 billion expected.

The Biden administration is conducting a review of U.S.-China trade policy, ahead of the expiry of the Trump-era “Phase 1” deal at the end of 2021, which called for China to increase purchases of U.S. agricultural goods and manufactured products.