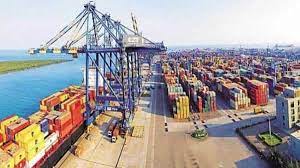 MUMBAI : Brokerage firm CLSA has an ‘Outperform’ rating for Adani Ports. As per the brokerage, because of the Yangon container terminal (YCT) controversy the company has got reputational risks, such as its removal from the Dow Jones sustainability indices (DJSI) and Environmental, Social and Governance (ESG) funds. It has set a price target of Rs 770 for the stock.

The brokerage note mentions that the “investor attention shall increase on companies involved in Myanmar such as Adani Ports following the coup by the army and human rights violations.” The firm has invested $133 million in a Yangon container terminal (YCT) land for which was supposed to have been leased from the Myanmar Economic Corporation (MEC). MEC, as per the UN, has links to the military, and activists believe that such funding strengthens the military’s autonomy.

Although Adani Ports denies the allegations and says that its land deal was done before the recommendation of UN sanctions and it was facilitated by the then government. While a $133 million investment in Myanmar is not a big write-off for the firm under a worst-case scenario it is reputational risk, it added.

CLSA also states their ESG score factors is a risk already and the company which has risen on thin volume, may see volatility from such controversy.