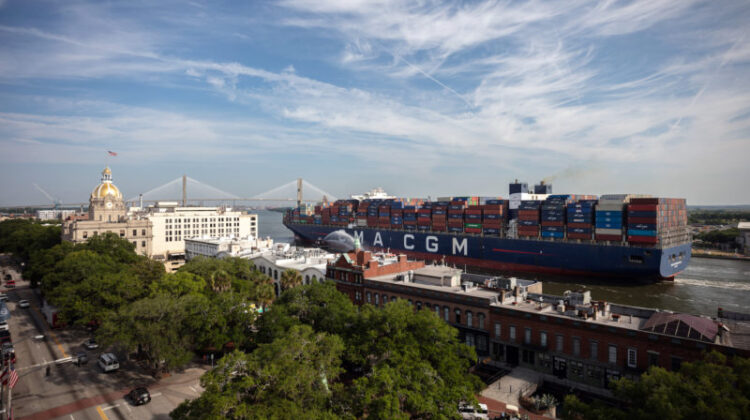 The vessel is deployed on the Ocean Alliance’s AWE3/Columbus service, which connects U.S. East Coast (and Halifax) and Asia via the Suez Canal, with cross-Pacific links to the U.S. West Coast. The AWE3/Columbus service includes 19 vessels ranging in size from 10,000 TEUs to 16,000 TEUs.

The ship made its first North American call earlier this month when it arrived at the Port of Halifax, the only port in Eastern Canada that can accommodate ultra-large vessels. It later called at the Port of New York and New Jersey and Port of Virginia. It’s final East Coast call will be at the Port of Charleston in South Carolina at the end of this month.

After docking at Port of Savannah’s Berth 9 on Wednesday morning, port workers began cargo operations with seven ship-to-shore cranes to load and unload an estimated 6,000 TEUs of cargo from the vessel.

To expand the Port of Savannah’s ability to serve vessels of Marco Polo’s size, the Georgia Ports Authority (GPA) has begun construction to straighten a bend at Berth 1 of Garden City Terminal, allowing the Savannah to simultaneously serve four 16,000-TEU vessels, as well as three additional ships. Berth 1 renovations will add an estimated 1 million TEUs per year of berth capacity by 2023.

GPA was scheduled to work five other vessels simultaneous to the CMA CGM Marco Polo on Wednesday.

“In my seven years serving on the port authority board, it has been gratifying to see Savannah step up to the plate and increase its capacity, infrastructure and workforce to accommodate massive vessels like the Marco Polo,” said outgoing GPA Board Chairman Will McKnight, who boarded the vessel at the mouth of the Savannah River with the pilots who guided the ship along the channel. “There is a reason Garden City Terminal has become the hub for global commerce in the Southeastern U.S: 30 cranes, nearly 10,000 feet of contiguous dock space, and a 1,345-acre container yard.”