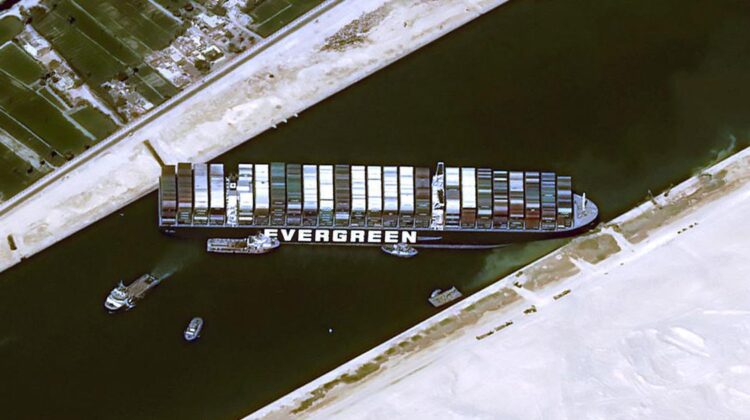 The vessel, Ever Given, has been stuck in the canal since Tuesday and has affected global trade and severe losses.

The giant cargo ship that has been stuck in Egypt’s Suez Canal since Tuesday is made up of an all-Indian crew, reports said on Thursday. All 25 crew members are safe and have been accounted for, according to AP.

Bernhard Schulte Shipmanagement, the company that manages the ship Ever Given, said that two pilots from Egypt’s canal authority were aboard the vessel to guide it when the grounding incident happened around 7.45 am on Tuesday.

The ship was carrying cargo between Asia and Europe through the man-made canal that divides continental Africa from the Sinai Peninsula. Dredgers, tugboats and backhoe were used to free the ship on Thursday but all failed even as the number of vessels unable to pass through the vital waterway rose to 150. The incident has led to global losses too.

Authorities have been unable to push the vessel even with the help of high tides and were looking for new ideas to free it. Satellite photos taken on Thursday by private Earth-imaging company Planet Labs Inc and analysed by news agency AP showed that the vessel was still stuck in the same location

Around 12% of the global trade goes through the Suez Canal, according to The Economic Times. Lieutenant General Osama Rabei, the head of the canal authority, said navigation through the waterway would remain suspended till the 400-meter container ship that weighs 2,00,000 metric tons is refloated.

A senior official of a team from Boskalis, a Dutch firm specialising in salvaging, said that moving the vessel could take days to weeks. “It is, in a manner of speaking, a very heavy whale on the beach,” Boskalis chairman Peter Berdowski told a Dutch television programme.

An Egyptian canal authority official said workers were hoping to avoid offloading containers from the vessel as it would take days, resulting in extending the jam.

The ship’s owner has offered a written apology for the turmoil. “We are determined to keep on working hard to resolve this situation as soon as possible,” Japanese company Shoei Kisen Kaisha said. “We would like to apologise to all parties affected by this incident, including the ships travelling and planning to travel through Suez Canal.”

Evergreen Marine Corporation, a Taiwan-based shipping company that operates the ship, said the Ever Given was overcome by strong winds as it entered the canal. Egyptian officials had cited the same reasons earlier as well.

An initial report indicated that there was a power blackout before the incident. However, the management of the vessel has denied it.

The blockage because of the ship is affecting trade globally. A Sakthivel, the chairperson of Apparel Export Promotion Council, told buyers in the European Union that their products will be delayed by 4-5 days, according to The Economic Times. “We expect this much delay for ships to reach the ports now as they have to take a longer route now,” he said. “Every ship going to Europe had to take this route. This route was very beneficial to shipping lines as it is time-saving, a shortcut to reach Europe.”

However, Sakthivel was also hopeful of a quick resolution of the problem. Further, the oil and gas shipment to Europe could be affected as well. The price of international benchmark Brent crude was at over $63 a barrel on Thursday.

The blockage will delay a range of parts and raw materials for European products such as cotton from India for clothes and auto parts from China, Sharat Ganapati, an economics professor at Georgetown University, said, AP reported.

“The fact that you have the most pivotal node in the trading network being blocked is going to have important welfare effects around the world,” said Woan Foong Wong, an economics professor at the University of Oregon.

Overall, shipping journal Lloyd’s List estimates that over $9 billion worth (more than Rs 65,000 crore) of goods is disrupted each day that the vessel remains stuck.