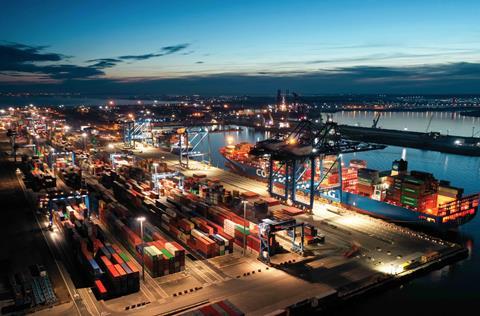 D P World-run Chennai Container Terminal Pvt Ltd (CCTPL) has won a paltry 1.13 per cent hike in rates, its first in 12 years, from the rate regulator for major ports.

The terminal has also won backing from the regulator to introduce a new category of rates for laden containers loaded/ discharged on/from long haul vessels to attract more long–haul vessels to CCTPL and increase origin/destination volumes.

The rates for long–haul vessels will be set at a 5% discount to the normal containers.

Vessels originating/ destined from/ to any ports in America/ Europe/ Africa or beyond Singapore/ Malaysia will be classified as long-haul vessels.

CCTPL is contractually mandated to ensure that at least 30 per cent of the total annual traffic handled at the facility will be non-transhipment traffic to develop Chennai as a hub port by attracting mainline vessels to call.

Non-transhipment traffic refers to containers not transhipped in the neighbouring ports of Colombo, Singapore, Port Klang, Dubai and Salalah.

Chennai Port Trust can terminate the contract if the terminal operator fails to achieve the 30 per cent non-transhipment traffic level for three consecutive years.

Free days for direct port delivery containers have been increased from the three days to 5 days.

Free days for all transshipment containers have been revised from the 30 days to 20 days.

CCTPL started operations in Chennai Port on a 30-year contract in November 2001.

High Court stay
In May 2011, the Tariff Authority for Major Ports (TAMP) cut rates at the terminal by 35 per cent when CCTPL asked for a raise. The Madras High Court stayed the rate cut on a petition brought by CCTL and allowed the operator to continue collecting the current rates. The petition is yet to be decided.

The new rates were approved by TAMP and notified in the gazette on 23 December 2020, based on the government’s guidelines in March 2019 for the older build, operate and transfer (BOT) operators such as CCTL.

The new rates have been set without considering the adjustment of past period surplus relating to the period of litigation.

“Therefore, whenever the High Court of Madras passes order disposing of the writ petition paving the way for the treatment of surplus/deficit or a decision from the ministry is received on the treatment of surplus/deficit arising over and above the admissible costs and permissible return during the period of litigation, whichever is earlier, as stipulated in the Tariff Guidelines 2019, the tariff of CCTPL approved now would be subject to review then, so as to capture the impact of the surplus that has accrued to CCTPL during the period of litigation,” TAMP said.