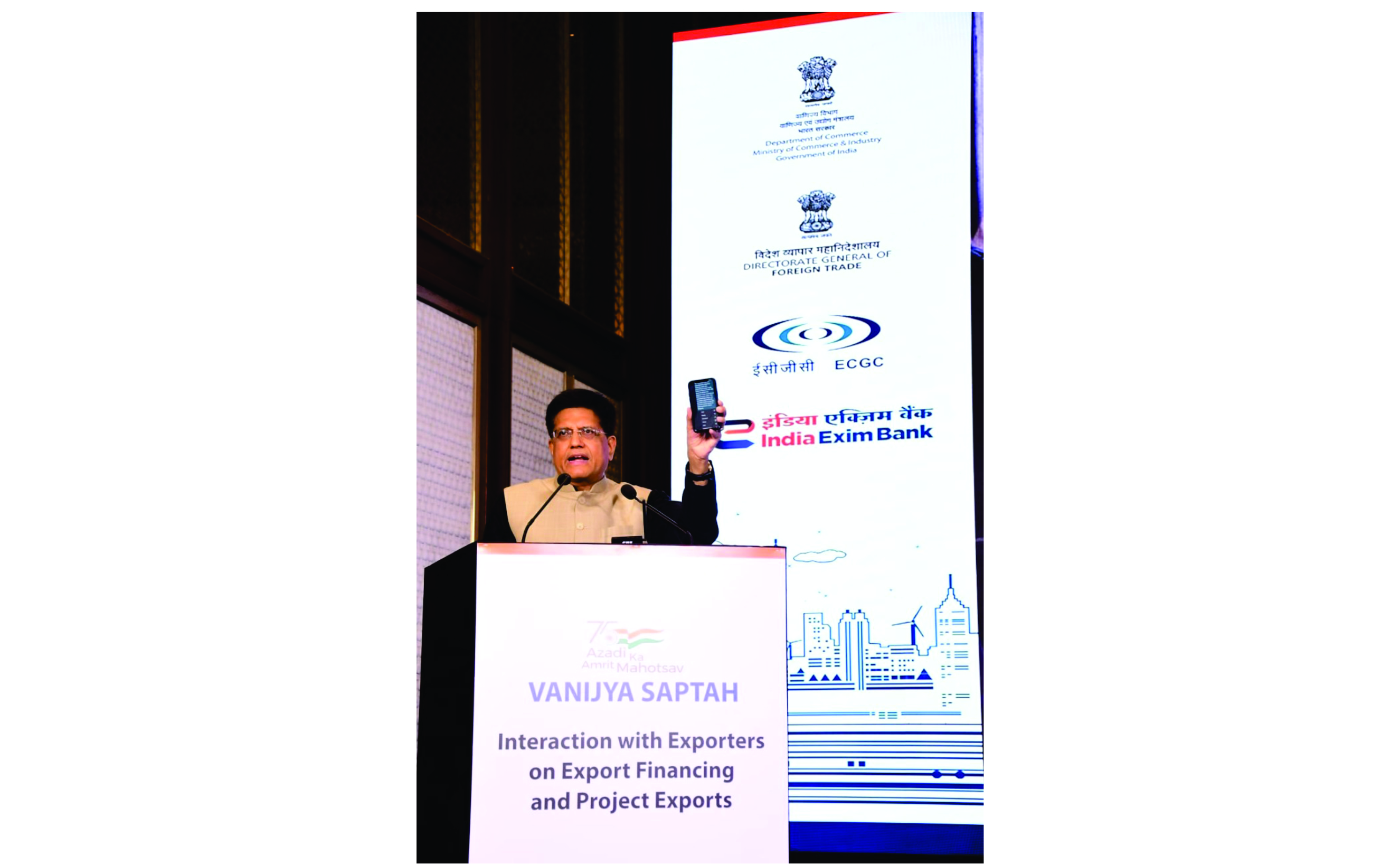 We may land up at or above $190 billion plus by end of September: Commerce Minister

MUMBAI : With the support of our exporters, we have been able to set an ambitious target. We are ahead of export target despite COVID-19. We will be at about $190 Billion by the end of September 2021. This is for the first time; India is crossing this figure in the first six months of the FY. Exports are at the cusp of exponential growth. Govt is working to bring a quantum leap in Quality, Productivity & Efficiency, to make our export basket Bigger, Better & Broader.” Union Minister for Commerce and Industry, Shri Piyush Goyal told this during an interaction with exporters and industry, in Mumbai today. The event was organized as part of ‘Vanijya Saptah’ being organized by Ministry of Commerce in the light of Azadi Ka Amrit Mahotsav Celebrations.

The event was jointly organized by Department of Commerce, Directorate General of Foreign Trade, Export Credit Guarantee Corporation of India, Export-Import Bank of India. The focus of the interaction was issues related to export finance, especially financing of project exports.

Speaking about the role played by banks in supporting the exporters, he suggested that Banks need to be liberal as regards to exchange rates. “Banks should in fact give benefit rather than penalise MSMEs,” he added. He also urged Indian Bankers’ Association to take a more liberal approach, with regard to credit rating, penal interest and penal insurance charge, in view of difficulties faced due to COVID-19.

Shri Goyal also advised the exporters to form small working groups and deliberate on basic structural improvements in-order to get free from clutches of government support. He also shared the success story of LED Bulbs in the country which was a result of removing subsidy and at the same time increasing the scale and giving freedom for manufacturers to run.

State Bank of India, EXIM Bank, ECGC made presentations on the various measures taken to promote exports in the country. SBI, through its presentation informed about export financing given by banks and conveyed that liquidity crunch will never stand in the way of India’s ability to achieve its $400 billion merchandise export target for 2021-22

In response to the queries and issues raised by the exporters during the event, the Minister advised the officials of Commerce Ministry to deliberate and find solution to all problems raised by the export community and the stakeholders. “We will carefully examine all points submitted by exporters and prepare Action Taken Reports on these,” he promised.

Shri Goyal also said that for the benefit of the exporters he will talk to the Reserve Bank of India regarding mandatory conversion of foreign exchange. “We can reconsider this especially if exporter needs to make import payments; RBI has brought this condition since there are many who are waiting to play the market,” he added. “On the issue of Merchanting Trade Transactions, the latest RBI guidelines provide that such transactions are allowed for goods permitted for exports or imports as per prevailing Foreign Trade Policy; RBI does not place any product-wise restriction or limit in such cases, merchanting traders are required to be genuine traders of goods and not merely financial intermediaries,” he informed exporters about RBI’s guidelines.

During the interaction, Engineering Export Promotion Council of India briefed the Minister about export finance problems and challenges being faced by exporters.