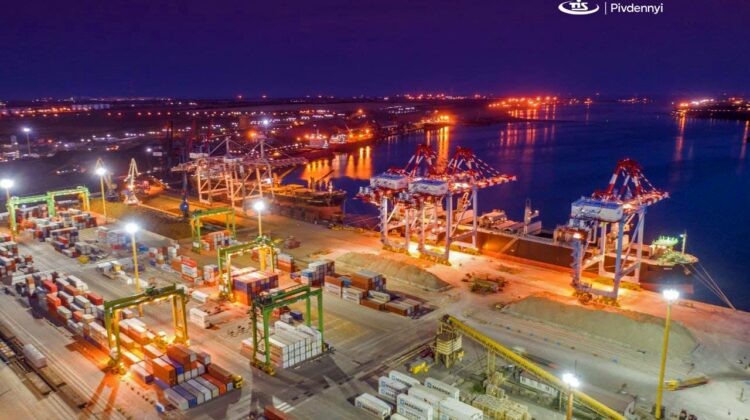 “The acquisition and handover of the port took place at one of the most challenging times in the history of global trade, however the port has defied all the odds to deliver a strong performance along with several milestone achievements,” DP World said. The culmination of which is the announcement last month that Maersk Line will transfer its entire Ukrainian business from Port of Chronomorsk, to DP World TIS Pivdennyi.

“Maersk currently handles approximately one out of every three containers that enter Ukraine – which will translate to the volumes handled by DP World TIS Pivdennyi once the shipping line’s consolidation of its business is complete in August.,” DP world said.

“DP World has been working in the Ukraine with TIS and P&O Maritime Ukraine for many years, therefore we have been well aware of the potential in this market for a long time, which is why we were so delighted to complete the acquisition last year,” said DP World Europe & Russia CEO Rashid Abdulla. “Our first 12 months working alongside TIS have soared past expectations, which is remarkable given the circumstances, and that demonstrates the strength of the market as well as the level of talent and commitment we have in the team in Pivdennyi.

“This has been most obviously demonstrated by Maersk’s decision to move the rest of their Ukraine business to our terminal and we are looking forward to that relationship developing even further in future.”

DP World believes the port is paused for further growth. The top five products shipped through the terminal last year were FMCG goods, rolled steel, bananas, cars, grains and other consumer goods, a diversified mix. Rail links to other destinations have improved and up to 90 containers are now being loaded per single train departure.

“The rail connection embodies DP World’s philosophy of port-centric logistics, which means bringing together multi-modal transport options into one port,’ continued Rashid. “The result is that cargo is moved more efficiently, more cost-effectively and with less environmental impact than through more geographically dispersed connections”.

The Ukrain is a good fit for DP World’s strategic network as it focuses on multi-modal transport and digitalization in Europe, the executive believes. “Over the past decade we have grown our European network to link between key strategic ports to allow us to offer our customers end-to-end services with our partners across the continent and into Asia, which the Ukraine can offer due to its strategically important location.

“The Ukrainian market is absolutely key to our European and global strategies, therefore this is just the beginning of the story for DP World TIS Pivdennyi, with more investment and development planned in the near future. The truly exciting part is what comes next and what that means for the sector in Ukraine, the people it serves and the countries it trades with,” Rashid concluded.