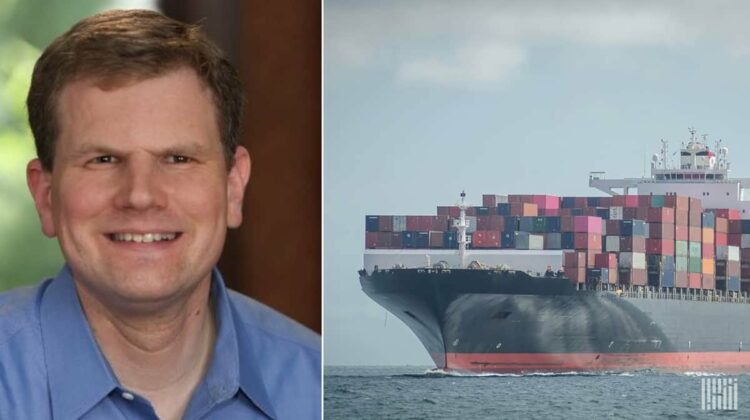 For logistics managers around the world, planning a budget for next year will be as easy as swimming in cement shoes. The inverted ratio for supply and demand is not expected to right itself anytime soon — and that means prices will continue to soar.

Importers and exporters have expressed their concerns to the Biden administration, Congress and the Federal Maritime Commission. While optimism has increased after the executive order on supply chain competition and FMC Commissioner Rebecca Dye’s Fact Finding 29 recommendations, it will take time for things to shake out.

FMC Chairman Daniel Maffei sat down exclusively with American Shipper to address the unprecedented challenges facing the flow of trade.

AMERICAN SHIPPER: Chairman Maffei, thank you for joining me. Let’s break out the much-anticipated recommendations by Commissioner Dye to Congress. We all know Congress can get easily distracted by the political flavorings of the day. You are a former congressman and legislative aide. How confident are you that Congress will follow through?

“Bottom line: If someone is charged for detention or demurrage and goes through all the trouble to file a complaint and at the end of the day does not get paid back without any interest, that would be unfair.”

AS: The executive order on supply chain competition has given the ability for the FMC to work with the Department of Justice to deter unlawful conduct. There has been a cry from some importers for the FMC to “step in” on the rates being charged. Has the FMC looked into these complaints and is there an update you can give?

MAFFEI: “Investigative teams are reviewing allegations coming out of the Fact Finding 29 investigation in addition to independent allegations. Since these are ongoing actions, I cannot say anything more on specific investigations.

“What I can say is, to date, we have not found evidence the alliances are being used to manipulate prices. The FMC will continue to monitor them closely. Some importers are saying the high prices are a result of the alliances charging the same price. There is nothing illegal about that. For example, you can have Coke and Pepsi charging the same price for their products without collusion.

“We are seeing carriers in the same alliance competing on price. You also have carriers that are not a part of the alliances showing the same pricing patterns. This is the market. It is easy to say the alliances are pushing up prices but you need to show evidence and prove it. High prices alone are not a violation of the Shipping Act. How high should prices be? It’s what the market dictates. It’s the same as when the prices were low for so long.

“For small and medium-sized importers, this is a real problem. This could be something Congress could take on. As FMC chairman, I do not approve of subsidizing imports. I do not think the Biden administration would either. The things we can do at the FMC are things that have nothing to do with market-based prices. What is truly unfair is the fact truckers and importers are being charged when they are prevented from either picking up or dropping off boxes.

“We recently announced a memorandum of understanding with the Department of Justice to potentially coordinate the implementation of our respective authorities over competition. We have had meetings at the staff level to ensure we are doing a good exchange of expertise, and I am confident both agencies are benefiting from that.

“The FMC is independent and we continue to evaluate conditions arising as a result of alliance activities. If there was true market manipulation such as limiting space and carriers sitting on empty ships refusing to use them, then we would take action. Carriers are buying new ships and new containers are being ordered. We are seeing them taking advantage of the increase in demand.”

AS: Let’s talk exports. The denial of exports, particularly agriculture, can be tracked. The imbalance of empties and full containers cannot be disputed. What is the FMC doing with the requests from the agriculture sector?

MAFFEI: “When exports are competing with empty containers to get on vessels, for me personally, that is not right. Some representatives in Congress want to address this, but we have to be careful of unintended consequences.

“Exporters have seen some real issues, such as access to containers and space. We get a lot of complaints but there are continued concerns on how difficult it will be to bring those cases.  Legislation allows exporters to sidestep the FMC by bringing private party complaints, but we haven’t seen very many initiated.

“Clearly there are some issues, and we will continue to work on unraveling them, but we also encourage parties, including exporters, to file formal complaints with the commission if they feel they have evidence of a violation of the Shipping Act.”

AS: The CDC recently released additional data on the transmission of the delta variant. While the FMC does not have jurisdiction on the sailings of the cruise ships, what are your thoughts on the vaccination of seafarers, as well as the safety of the cruise industry?

MAFFEI: “My colleague,Commissioner Louis Sola, has been investigating the impacts of COVID-19 on the cruise industry, and his work has shown how heavily dependent on cruise sailings states like Florida, Texas and Alaska are. As individual commissioners, we are trying to be constructive where we can, even when it is not entirely within our wheelhouse as a commission. We advocated for vaccines for the longshoremen because of how essential they are to our nation’s economy.

“I think the big issue with COVID-19 is the port system is already under stress. If another port in China shuts down or becomes unfunctional, it will further stress the U.S. system. The United States is facing a prolonged period of high consumer demand and strained supply.

“Worst-case scenario — it could reduce the logistical capacity in the system to the depths we had during the early days of the pandemic. We have to stay vigilant and we have to get a handle on it.”

AS: Which leads me to the Transportation Bill. If passed and signed, it will in the end help maritime because everything in trade is connected.

MAFFEI: “The ports have done a good job, for the most part, in handling the surge in capacity. We have imported more in the first half of this year than in any full year prior. The supply chain is overheated. It’s like we are going from nine lanes to four lanes and then squeezing more traffic into them.

“The ports in Los Angeles and Long Beach talk about the gains they’ve made in capacity but then say they don’t have enough rails or warehouses to keep up. From top to bottom, the system is overwhelmed. More transparency among the ports and carriers, which Port of Los Angeles Director Gene Seroka has talked about, will also help add capacity. But ultimately, the system needs more resilience, especially because I do not expect capacity demand to recede until late 2022.”