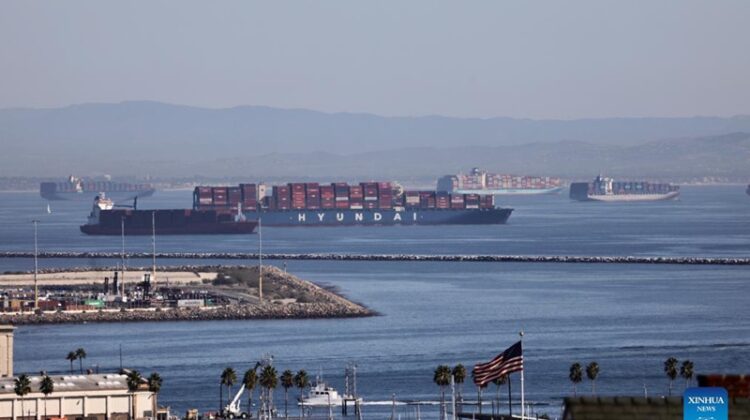 NEW YORK : The unknowns of the new Omicron variant could exacerbate the US port logjam and push freight costs from China to the US’ West Coast to a new high, a veteran industry analyst said , as the emergence of Omicron instantly set global shipping rates on fire.

The new variant has apparently made global markets jittery, with the Baltic Dry Index seeing a big rebound over the past few days. The shipping cost benchmark recorded its best day in almost two months on Monday, with the overall index factoring in rates for Capesize, Panamax and Supramax vessels moving up 4.1 percent to 2,881 points.

This suggests a gain of nearly 20 percent from the index’s recent ebb of 2,406 points on November 17. According to media reports, the index hit a multi-year high of 5,545 points on September 27.

The effects of the new coronavirus variant will be far-reaching, as ocean routes from and to China could be subject to the threats posed by the Omicron strain, Wu Minghua, a Shanghai-based veteran shipping industry analyst, told a source .

Other than movement curbs such as air transport restrictions that have been imposed by some countries to stymie Omicron, global sea transportation has yet to be hit by new restriction measures .

The rapid spread of the new variant, which is reportedly more contagious than other coronavirus variants, has resulted in the imposition of immediate international travel curbs by about 20 economies targeting South Africa and its neighboring countries.

Except for Hong Kong, other Chinese provinces and cities have discovered no Omicron COVID-19 variant cases so far, Xu Wenbo, an official with the Chinese Center for Disease Control and Prevention (CDC), told reporters y.

China has readied itself for the new variant in terms of technical preparations and research, Xu said.

The Omicron variant, initially found in South Africa, had been detected in a number of countries and regions including Botswana, Israel, Belgium, Italy, the UK, Australia and Canada.

Nonetheless, quarantine rules will likely change in tandem with the spread of the new variant, which might ratchet up variable costs for certain shipping firms, such as congestion, peak season and container shortage surcharges, he said.

Factoring in the Omicron-induced unknowns to global maritime trade, arguably a drag on the already-congested US ports, the veteran estimated that transpacific rates from China to the US West Coast will again touch $20,000 per 40-foot equivalent unit (FEU) in or before January and potentially hit a fresh high.

Container freight costs from China to the West Coast of North America now stand at around $14,700 per FEU, down from a September peak of close to $20,000 and a surge of almost fourfold from the October 2020 levels, industry data showed.

In a sign of market expectations for higher freight rates, Shanghai-listed shipping giant COSCO Shipping Holdings extended its rally and closed up 5.98 percent , outperforming the Shanghai Composite Index, which edged up 0.03 percent.