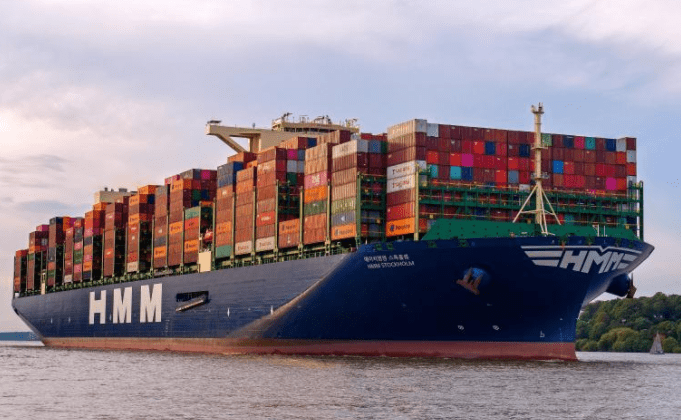 For the same period, the net profit of the South Korean flagship liner operator was US$310 million.

HMM has also seen an increase in its container handling volumes, which grew by 8.4% to 1.93 million TEU in the first six months of the year compared to the same period of 2020.

The has significantly improved earnings in H1 2021, mainly led by higher freight rates, increased container handling volumes, and efficient fleet operations including twelve 24,000TEU container ships, according to a statement.

The gap between operating income and net profit in the first half of the year primarily results from the incurrence of loss from the valuation of derivatives under the IFRS-16 accounting standard, said HMM.

That is a paper loss without an impact on the actual cash flow of the company, according to HMM, which noted, “the majority of loss on the valuation of derivatives will no longer be reflected in its future financial statements as the derivatives transaction was terminated in June 2021.”

The Asian box line believes the highly elevated freight rates will last until the end of the year, at least and expects the global supply chain to remain strained, resulting from terminal congestions in major ports worldwide, the shortage of both vessel space and containers, and increased cargo demand.

Aiming to face the upsurge in container demand, HMM has deployed a total of 38 extra-loader vessels, consisting of 29 to the Asia-North America trade, 3 to the Asia-North Europe trade, 5 to the Eastern Russia trade, and 1 to the Korea-Vietnam route since August.

HMM said it “will continue to deal with market changes flexibly and will contribute to stabilising the logistics flow worldwide.”

Furthermore, the Seoul-based carrier has announced the acquisition of newly-built containers, consisting of 120,000TEU of dry units and 4,600TEU of refrigerated units to alleviate the current shortage of equipment. All the new boxes will be added to the company’s container fleet within this year.

Of the dry units, around 98,000 TEU have been delivered, while HMM started to take delivery of refrigerated units, according to the announcement.