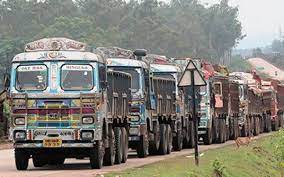 Relocate clearance pocedures away from the border, and partner countries must adopt well-established practices

NEW DELHI : Of late, India has been active in improving volume of trade flows through the land route with its eastern neighbours under the preamble of India’s Act East policy. With this in mind, improving border management for faster movement of cargo has been a one-point agenda of the present government. If one travels to the important border crossing point like Petrapole/Raxual, one comes across cargo traffic mayhem, with lines of trucks waiting to cross over, parking chaos, etc. The first impression one gets is that the situation is same as five years backs. The fact is that the pace of capacity expansion in border management falls short of the growth of cargoes. This calls into question whether India is following the right path for border management?

Worldwide experience on streamlining cross-border management suggests three pathways: capital investment, new legislation and regulatory reform. Capital investment was the key component of the strategy for developing the Pan-American Highway, but its performance suffered from absence of desired attention given to the regulatory reform and legislation to facilitate cross-border movements.

On the other hand, the EU has relied on legislation to implement strategies for the development of the trans-European transport network. It must be mentioned that India has been pro-active lately in adopting the legislation route with neighbouring countries so that trans-border truck movement becomes a feasibility.

Capital investment at border points is costly for developing countries like India, Nepal, Myanmar, Bhutan, and Bangladesh. Indeed, none has funds to undertake such improvements at all the officially designated border points. What has happened in reality is capital investment at only a few of the principal border points. However, the volume of trade has grown significantly faster than the expansion of capacity.In India, it has become increasingly difficult to acquire land for any project. At the border crossing point, one comes to realise that procuring land for infrastructure expansion is a herculean task as empty space does not exist. Rapid urbanisation coupled with encroachment on public land imply that forceful eviction will lead to law and order issues unless hefty compensation is doled out. Thus, capital investment route is not a reality. Our focus should be on the other two avenues to decongest border.

While legislation may be one of the ways, there is no denying that probably the best option for increasing the efficiency of clearing import and export cargoes is to relocate the clearance procedures away from the border. Indeed, this is one of the basic insights of the EU’s programme. Inspections of truck registration, driver’s licence and certificate for road-worthiness can be conducted along the corridor but away from the border as part of the domestic programme of roadside inspections.

Train inspection can take place at marshalling yards where they are supposed to stop, instead of border-crossing points. Cargo inspection and clearance procedures can be relocated at inland-bonded warehouses, container depots and dry ports. This approach was pioneered to alleviate congestion in international seaports but is now being adapted for imports arriving through land borders in Europe and transition economies. It allows movement of goods under bond from the border to inland customs facilities, special economic zones or other enclaves that are granted duty-free status. This may include allowing cargo to be cleared at factories. This is a way to decongest border points.

India and its neighbouring countries are yet to ratify adopt all these conventions. The absence of ratification to the international convention implies that trade between India and neighbouring countries cannot be governed by an international efficient system. They need to develop their own systems for trading between themselves, which is basically the practice that both countries follow.

However, it must be noted that it is always better to adopt best international practices than go for self-developing a process ratified by partner countries. Already, there exist a well-established process for on-road cargo movement across border, namely, TIR convention, which facilitates movement of goods in sealed vehicles or containers from a customs office of departure in one country to a customs office of destination in another country without requiring extensive and time-consuming border checks at intermediate borders while, at the same time, providing customs authorities with the required security and guarantees.

To date, more than 33,000 international transport operators had been authorised (by their respective competent national authorities) to access the TIR system, using around 1.5 million TIR carnets per year. It is high time that South Asian countries adopt it fast without going for developing cumbersome process/procedures which need to be ratified by partner countries and, at the same time, build capital infrastructure at the border for which funds are in short supply.