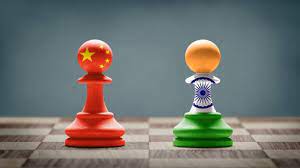 Jingoism, anti-China sentiment and policy intervention failed to dent India’s two-way trade with China in 2020-21, even as global trade contracted when nations across the world went into lockdowns to contain the COVID-19 pandemic.

India’s imports from China held steady at the previous year’s level and exports soared. China also emerged as India’s largest trade partner as the value of transactions between the US and India fell.

India imported goods worth $65.21 billion from China in 2020-21, according to provisional estimates published by the ministry of commerce and industry. Imports in the previous year were worth $65.26 billion. Exports from India to China climbed 27.5 percent from a year ago to $21.19 billion.

India’s imports from China, however, are much lower than what they were in 2017-18 when they had climbed as high as $76.38 billion, led by a jump in imports of mobile phone devices, populated printed circuit boards and other parts used in the assembly of these instruments.

Incentives offered by the Union government for local manufacturing of parts and assembly of phones since then has reduced imports of telecom devices from $15.59 billion that year to $6.48 billion.

Electronic and electric goods and parts accounted for nearly half of the import bill in 2020-21, as they did in the previous years. Telecom devices – mobile phones and parts – continue to be the most imported merchandise by value. The value of imports of telecom devices and parts jumped 14.7 percent from a year ago, as work from home and online classes became a norm during the year. Only a small part of that rise in the value of imports can be attributed to an increase in the cost of the parts and raw materials.

The imports of computer hardware too jumped during the year – rising by 26.5 percent to $5.3 billion, for the same reason. The imports of consumer electronics and parts too held steady at $2.38 billion and recorded a 6.7 percent growth despite the restrictions placed on imports of televisions and other items as the Union government launched the Aatmanirbhar Bharat mission during the first wave of the pandemic.

In any case, China is a smaller source for televisions imports compared to Vietnam, which has over the past few years emerged as a manufacturing hub for these goods.

China continued to be a large source for imports of chemicals, particularly pharmaceuticals ingredients. Those imports too climbed during the year as the demand for medication rose. The imports of automobile components also climbed.