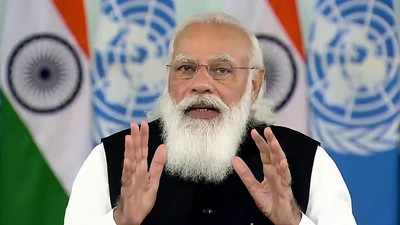 NEW DELHI : Overcoming resistance from China, an unprecedented India-led UN Security Council session highlighted the primacy of the UNCLOS (United Nations Convention on the Law of the Sea) which “sets out the legal framework applicable to activities in the oceans, including countering illicit activities at sea”

In a first for any Indian Prime Minister, Shri Narendra Modi chaired the first-ever independent discussion on maritime security in the UNSC on Monday, its first major activity during India’s month of presidency of the global body.

Significantly, Russian President Vladimir Putin was also present. China’s aggressive actions in the South China Sea and East China Sea, island building and bullying of countries by its fishing militia have been a source of Even though the Permanent Court of Arbitration (PCA) under UNCLOS ruled in 2016 that China’s activities in the South China Sea are illegal, Beijing has continued undeterred, leading to growing tensions. On Monday, however, China submitted diplomatically to asserting the primacy of UNCLOS under severe international pressure.

In his remarks, Modi pointed to India’s own record of abiding by the decision of the PCA and settling its maritime boundary dispute with Bangladesh in conformity with international arbitration. The session had its tense moments, with the Chinese official lashing out at Japan for emptying Fukushima waters into the Pacific as it asked the ASEAN countries to work out a code of conduct. It was left to Blinken to criticise China’s actions in the South China Sea.
Held under the agenda item “Maintenance of International Peace & Security”, the meeting was attended by two presidents (Russia and Kenya), two PMs (India and Vietnam), and 10 ministers, seven of them being foreign ministers. It was one of the highest levels of participation in the UNSC of late.

Speaking at the event, Modi called for joint efforts to arrive at a framework for dealing with maritime issues. Officials, who negotiated the outcome document, said India had taken a consensus-building approach by consulting with all UNSC members for the most acceptable language. The PM’s five-point principles, which called on UNSC to develop a roadmap for international maritime security, was welcomed by all participants.