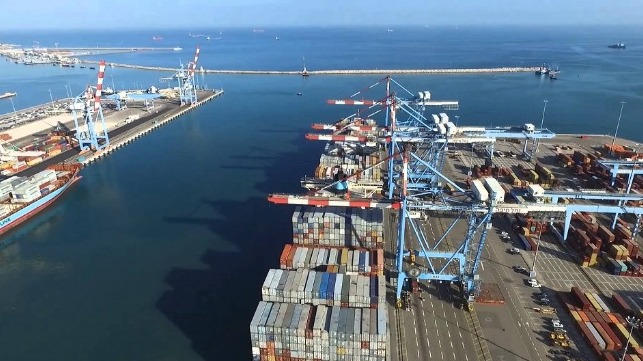 According to the Israeli Globes newspaper, the companies signed an agreement for exclusive cooperation to privatize the port which is one of two major seaports in Israel.

The Israeli Shipyards Company said that this cooperation helps enhance the competitiveness of ports, reduce costs, and establish an advanced infrastructure for international trade and logistics, noting that this will make Haifa port a focal point in the Middle East.

Dubai Ports, which is owned by the Emirati government and operates facilities around the world, said last month that it had signed a series of contracts with the Israeli Dovertower that included a joint proposal to privatize Haifa Port.

In a bid to encourage competition and reduce costs, Israel sells state-owned ports and builds new private ones, with concerns that nearby such port in Haifa, built by the Chinese Shanghai International Port group, may outshine its less modern, public neighbor.

Israel has received offers from international firms, including the Belgian European Ports, British SSA Marine, Global Ports Holding and an American and Indian operator, according to the Israeli Globes.

Each bidder must deposit a bank guarantee of 5 million shekels ($1.5 million) and sign a confidentiality agreement as a condition for access to the Haifa Port information room.

The contract was signed by Dovertower head Shlomi Fogel during his visit to Dubai, the Hebrew-language newspaper said.

It also contains articles on a joint bid in the privatization of Haifa port and a possible direct shipping line between the Red Sea port of Eilat and Dubai’s Jebel Ali.

The Palestinian Authority and resistance factions have denounced the normalization agreements, saying they don’t serve the Palestinian cause and ignores the rights of Palestinians.

Reefer market soars in 2022, challenges expected in next year

Manufacturing orders from China down 40% in unrelenting demand collapse