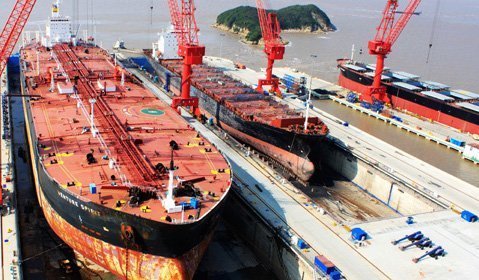 ZHOUSHAN : The Zhoushan archipelago in eastern China is among the most important destinations in the world for ship repair.

Shipowners planning to send their vessels there will need to be aware of new local rules in place designed to limit the spread of new variants of Covid-19.

While many ports in China have put certain restrictions or demands for tests on ships or seafarers that have visited the Indian sub-continent in the previous three weeks, vessels heading to Zhoushan face far greater complications.

According to a circular from Oasis P&I Services, a quarantine period may be imposed of up to 42 days, depending on the specific situation of the vessel and requirements of the shipyard in charge of the repair.

Antonis Kalofonos from Greek repair consultants Interyards told Splash: “The repairs in China for vessels prior callings at India are very difficult.”

Kalofonos said ships that had called in India up to three months prior were being rejected at Zhoushan.

Moreover, the Zhoushan area has restrictions for vessels with previous calls or with crew exchanges at other countries including the Philippines, Vietnam, Brazil and Turkey. The restrictions at Zhoushan are set to be reviewed at the end of June.

Zhoushan’s ban was put in place after 11 crewmembers tested positive for Covid-19 in late-April. The infected people were onboard a vessel that had docked at a local shipyard.

Shipyards in other areas of China also have restrictions for vessels coming from India but they are not as strict as Zhoushan.

Owners are bing advised that Turkey remains one of the easier destinations to send vessels for repair during the pandemic. A spokesperson for Kuzey Star Shipyard , one of Turkey’s largest yards, told Splash today there no restrictions for crew calling. The only one condition is that the vessel must be disinfected by authorised companies prior to berthing, which takes just a few hours.