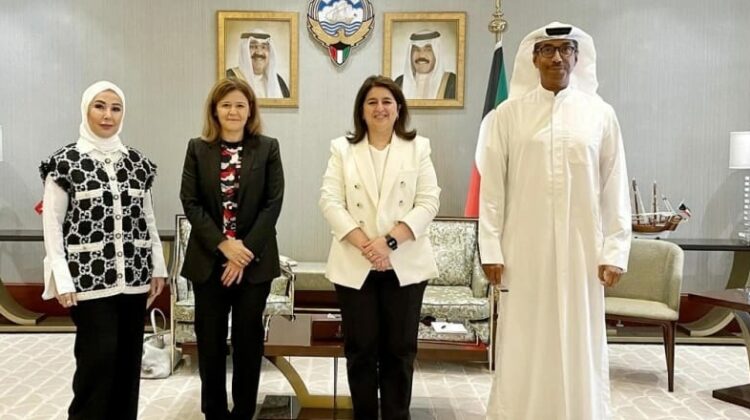 KUWAIT : Minister of Public Works and Minister of State for Communications and Information Technology, Dr. Rana Abdullah Al-Faris, Kuwait announced the launch of the first forum for digital transformation in a strategic partnership with Agility, which will be held under the patronage of His Highness the Prime Minister Sheikh Sabah Al-Khaled Al-Sabah,Kuwait and organized by the Ministry of State for Communications and Information Technology Affairs at Sheikh Jaber Al-Ahmad Cultural Center on Wednesday, September 15, 2021.

This came when His Excellency the Minister of Public Works and Minister of State for Communications and Information Technology, Dr. Rana Abdullah Al-Faris, received Agility’s Chairman of the Board of Directors, Mrs. Hanadi Al-Saleh, at Seif Palace, in a meeting that was held to formalize the strategic partnership of Agility for the first forum for digital transformation.

In a statement, Minister Al-Fares indicated that this first forum for digital transformation, which is organized in a strategic partnership with Agility, will be directed to government leaders to talk about the foundations of building and enhancing digital culture in the public sector, in addition to announcing the official launch of the unified government application for electronic services (Sahel). ), an application that enhances the efficiency and speed of completion of government transactions and operations.

Dr. Al-Fares explained that this event seeks to shed light on the necessity of moving towards creating the appropriate environment for the success of digital transformation processes, and that it will also bring together a number of private sector companies to present some experiences in relation to digital transformation.

The Digital Transformation Forum aims to bring together government leaders and a number of key private sector companies to talk about building a first-class digital culture in the Kuwaiti public sector.

In turn, Agility Chairman Hanadi Al-Saleh said: “The Digital Transformation Forum is a great opportunity to bring together leaders from the public and private sectors who want to contribute to Kuwait’s digital future. Sahel is a vivid example of what can be developed in Kuwait by adopting digital technology.”

Al-Saleh added: “We are proud to support this important forum on digital and leadership skills in Kuwait. At Agility, we learned the importance of digitization and shaped our culture and strategy. That’s why Agility develops and invests in digital solutions for governments and businesses, and nationally, we support the government’s vision of using technology and data to build a more prosperous future for Kuwait.”