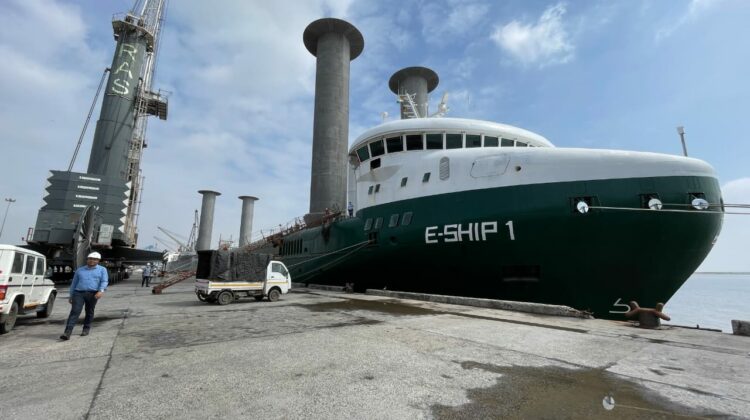 GANDHIDHAM : M.V. E-SHIP 1 made its maiden voyage at Deendayal Port .The Ship was made fast at CJ-15A for loading 15 Windmill blades . This vessel uses wind power to generate electricity while in the sea, for running the generators on-board. Use of fossil fuel is limited to her stay in the harbour only.

The E-Ship 1 is a RoRo cargo ship that made its first voyage with cargo in August 2010. The ship is owned by the third-largest wind turbine manufacturer, Germany‘s Enercon GmbH. It is used to transport wind turbine components. The E-Ship 1 is a Flettner ship: four large rotorsails that rise from its deck are rotated via a mechanical linkage to the ship’s propellers. The sails, or Flettner rotors, aid the ship’s propulsion by means of the Magnus effect – the perpendicular force that is exerted on a spinning body moving through a fluid stream.

The hull of E-Ship 1 was built by German shipbuilder Lindenau Werft in Kiel. The ship’s launch took place on 2 August 2008, with the delivery date estimated for the first half of 2009. In September 2008,[2] Lindenau-Werft declared insolvency. On 25 January 2009, it was announced that E-Ship 1 would be towed to and completed by German shipyard Cassens-Werft [de] in Emden.

Steel construction work was completed in 2010, and the ship was docked at North Sea Works, where final construction took place with the ship in the water. In April 2010, the E-Ship 1 returned to Cassens Werft, where preparations were made for sea trials. The ship set off for a first sea trial from Emden to Bremerhaven on 6 July 2010.[3] Three trial runs were completed until the end of July.[4] The ship made its first voyage with cargo in August 2010, carrying nine turbines for Castledockrell Wind Farm from Emden to Dublin, Ireland.[5]

The ship’s bridge is located at the bow, and it has three decks and two port-related long-boom cranes with payload capabilities of 80 and 120 tonnes. The ship has a rear ramp, and can function as a RoLo cargo ship. The vessel is 130 meters in length and 22.5 meters wide, with a gross tonnage of 12,968 and a deadweight tonnage of 10,000. It is equipped with fore and aft maneuvering thrusters and has an Ice class GL E3 hull rating.

The E-Ship 1 was equipped with nine Mitsubishi marine diesel engines with a total output of 3.5 MW. The ship’s exhaust gas boilers are connected to a Siemens downstream steam turbine, which in turn drives four Enercon-developed Flettner rotors. These rotors, resembling four large cylinders mounted on the ship’s deck, are 27 meters tall and 4 meters in diameter. Due to technical problems the Mitsubishi diesel generators were replaced by Caterpillar diesel generators in 2013. The new Caterpillar generators generate a total power of 6.3 MW.