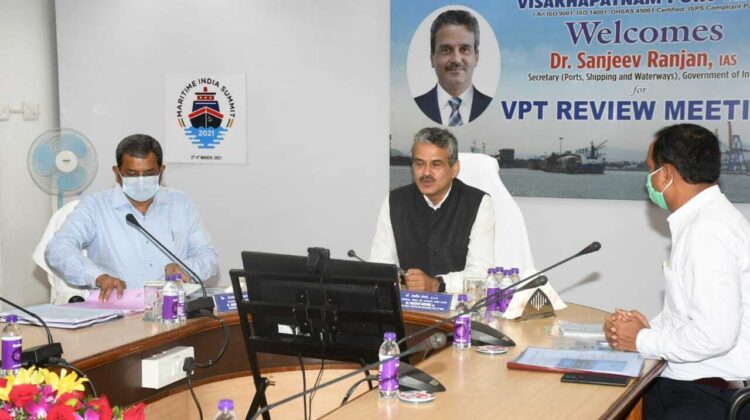 The VPT Chairman briefed him on the infrastructure facilities available, capacities in handling of cargo, modernisation and mechanisation, covered storage facilities, solar power, sewage treatment plant for internal and industrial purpose, investment potential and zone of opportunities in exploring imports and export improvements at the port.

Later, the Secretary held review meetings with officials of VPT, Dredging Corporation of India, Indian Maritime University, Centre of Excellence in Maritime and Ship Building and Light House and suggested them to explore the long-term vision / plans duly listing out the way forward by mechanising and modernisation of the infrastructure fully gearing up for sustainability in future. The United Port and Dock Employees Union, affiliated to CITU, has submitted a memorandum to Mr. Sanjeev Ranjan, seeking among other things giving a fair chance to labour to represent their grievances through the Labour Federations.

Union general secretary V.S. Padmanabha Raju noted that the labour federations should be given an opportunity to express their view individually on the Major Ports Authority Act, 2021. The other demands include: increasing the power in operational areas in view severe staff shortage, which was leading to undue burden on the existing staff in VPT and a rethink on the PPP policy, which was not benefiting the public sector ports but only private players.