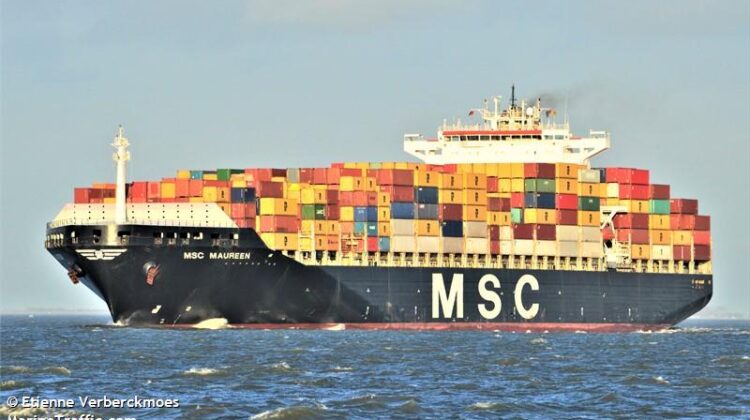 FRANCE : Taking into account MSC’s new orders, as well as the company’s active involvement in the secondhand tonnage market, it can be said that it is all set to overtake Maersk on a capacity basis sometime next year, becoming the largest container line in the world.

According to Alphaliner, the two carriers currently have a capacity gap of 225,000 TEUs. Maersk operates around 709 ships with a combined net tonnage of 4,121,964 TEU. On the other hand, MSC operates 588 ships with a net tonnage of 3,897,002 TEU, and it has built up a very large orderbook.

In addition to its active newbuilding program, MSC is also aggressively acquiring second-hand tonnage. Comparing Maersk’s fleet expansion strategy and order books, it’s safe to say that MSC might be the biggest container line in 2022 when it comes to net tonnage.

“MSC is behind orders for at least 35 big deep-sea vessels, with a combined capacity of nearly 660,000 teu, while Maersk’s current order book only includes 16 ‘regional’ ships, for 41,674 TEU,” noted Alphaliner. “MSC’s pipeline could grow even further since several big new builds are believed to be joining the MSC fleet under long-term charters yet to be confirmed.”

On the other hand, as Maersk refocuses on decarbonization and dives deeper into exploring alternative fuels, they are expected to refrain from placing any large orders in the near term. Instead, they have been investing heavily in extending their reach into supply chain logistics.

“MSC’s path to the number-one spot in liner shipping has been one of organic growth, whereas Maersk owes its top ranking to the takeover of Sealand (in 1999), P&O Nedlloyd (2005) and Hamburg Süd (2017),” noted Alphaliner.