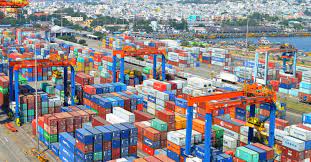 Nearly 650 acres of land was identified in the said villages for the first phase of the port project.

VIJAYWADA : In another step forward in its plans to develop four non-major ports in the State, the government Tuesday approved the technical and financial bids for the construction of a greenfield port at Ramayapatnam in Prakasam district by a Joint Venture led by Navayuga Engineering Company Limited. The JV quoted Rs 2,634.65 crore for constructing the port at 0.5 per cent less than the IBM value.

A Government Order issued by the Special Chief Secretary (infrastructure and industries) R Karikal Valaven said the State government approved the technical and financial bids received for the construction of a greenfield port at Ramayapatnam on engineering, procurement and construction basis and permitted Andhra Pradesh Maritime Board Chief Executive Officer to issue Letter of Acceptance to the lowest bidder, JV led by Navayuga. The government is planning to develop four non-major ports to cater to the increasing demand of various types of bulk and container cargo, which is likely to increase to 300-350 million tonnes a year by 2024- 25.

The other four nonmajor ports proposed are Bhavanapadu port in Srikakulam district, Kakinada Port in East Godavari and Machilipatnam Port in Krishna district. Kakinada port has already been awarded to GMR SEZ Gateway Pvt Ltd. The government had earlier engaged RITES consultants for preparation of Detailed Project Reports for the development of Ramayapatnam Port and the DPR was approved in June 2020. When the DPR was accepted, Industries Minister Mekapat Goutham Reddy had tweeted: “We approved the DPR prepared by RITES towards the development of Ramayapatnam Port and for taking up Phase 1 works with a total project cost of Rs 37.36bn ($493.05m) in 36 months.’’ The government recently invited bids for awarding the works.

Recently, the Prakasam administration had cleared major hurdle for taking up the first phase works by convincing the villagers of Karlapalem, Mondivaripalem and Avulavaripalem of Salipeta and Ravooru panchayats in Gudlur mandal to give their land. Nearly 650 acres of land was identified in the said villages for the first phase of the port project.