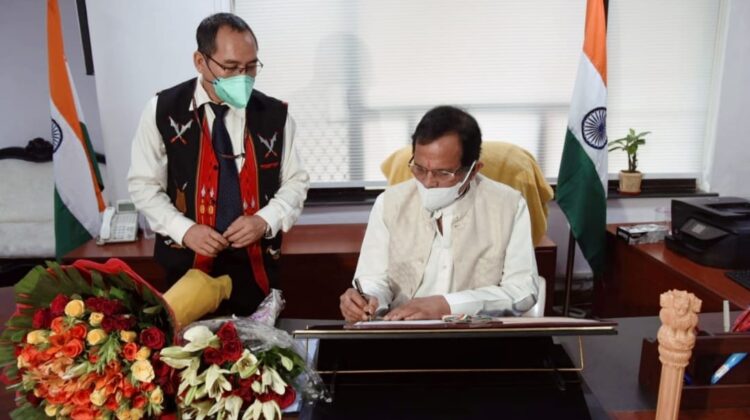 NEW DELHI : Shri Shripad Y Naik recently assumed the charge of Union Minister of State for Ministry of Ports, Shipping and Waterways at Transport Bhawan. “I extend my gratitude to Hon’ble PM Shri Narendra Modi ji for entrusting me this responsibility,” he tweeted expressing his gratitude to the PM.

There was no job loss in the ports and shipping sector despite the Covid-19 crisis impacting the major ports and causing a considerable decline in the total traffic and containers traffic, Union minister Shripad Naik informed Parliament on Thursday.

In a written reply to the Lok Sabha, Minister of State for Ports, Shipping and Waterways, Shripad Naik said the ministry has given monetary compensation of Rs 50 lakh to the dependent members or legal heirs of the employees who lost their lives due to acquired COVID infection at work place.

“The impact of Covid-19 at major ports started from March 2020. There was a considerable decline in the total traffic and containers traffic … there is no job loss in this sector,” Naik said.

He said Ministry of Ports, Shipping and Waterways has issued necessary directions from time to time to ports to put in place a screening, detection and quarantine system of disembarking Seafarers or cruise passengers, to obtain self-declaration from arriving crews/passengers, to install thermal scanners.

Replying to a separate question, he said there was no adverse impact on the overall lndian maritime trade due to the blockage of the Suez canal arising out of the grounding of the shipping vessel Ever Given.

“One Indian vessel had to wait in queue for the traffic to open up,” he said.

The Ever Given ship got stuck in the Suez Canal on 23 March 2021 and after numerous salvage operations for 6 days, the ship was freed and the canal, cleared.

Relying to another question, Naik said Indian shipping enterprises have also been allowed to acquire ships abroad and also flag them in the country of their convenience, under the lndian Controlled Tonnage scheme.