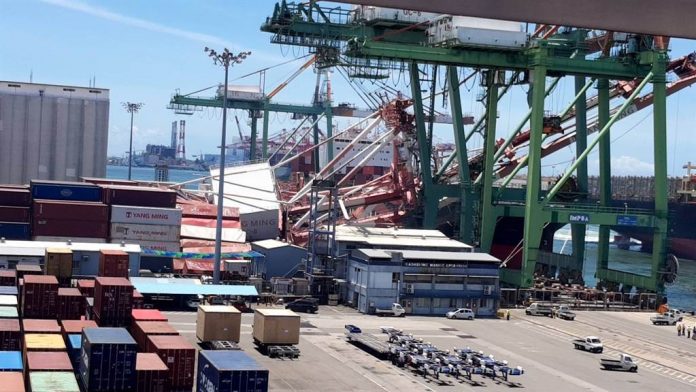 VIETNAM : The 8,500TEU OOCL Durban has crashed with the No. 70 Yangming Wharf bridge crane at the Port of Kaohsiung in Taiwan causing two cranes to collapse on the spot.

According to reports, one worker was injured and another two were trapped in the wreckage after the fall of the cranes, but all of them have been rescued.

The vessel seems to have approached the port too close, according to the investigation by Kaohsiung Port Authority, which said that the Air Traffic Control has repeatedly warned the ship without receiving a response.

In the video, it seems that the crane has also destroyed a number of containers during its fall, while another smaller boxhsip is also seen between OOCL Durban and the pier, but it is still unknown if it has been damaged during the accident.

At the moment, the cause of the accident is still unknown and the investigations are continuing. Additionally, the initial estimated loss will exceed hundreds of millions, according to local reports.