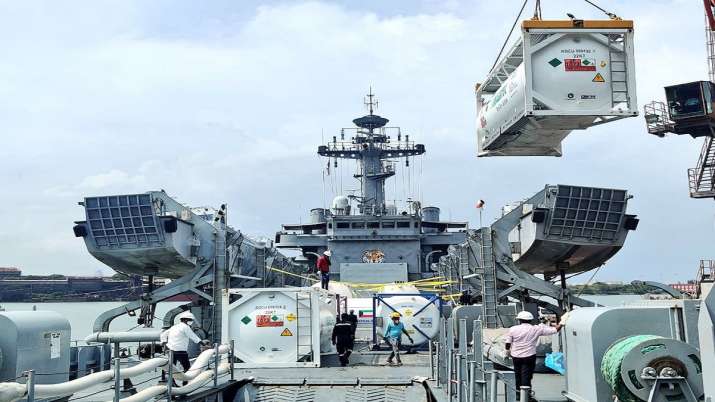 NEW DELHI : As part of Operation Samudra Setu II, INS Shardul, the Indian Navy ship of the Southern Naval Command, arrived in Kochi on Thursday with four ISO containers carrying 87 MT of liquid medical Oxygen from Kuwait and the UAE.

Operation Samudra Setu-II was launched by the Indian Navy for shipment of medical Oxygen-filled cryogenic containers and associated medical equipment from various countries in support of the nation’s fight against COVID-19.

The deployment of frontline warships including destroyers, frigates, tankers and amphibious ships of the Navy for the operation forms a significant part of the multiple lines of efforts, by the Government of India and the Indian Navy to supplement the Oxygen requirement in the country,a Defence release said.

“The ship arrived at New Mangalore Port on May 25, where it disembarked 231.77 MT of liquid medical Oxygen comprising seven ISO containers, two semi trailers and 1200 Oxygen cylinders”, it said.

The ship entered Kochi at 3 pm and berthed at ICTT, Vallarpadam under Cochin Port Trust.