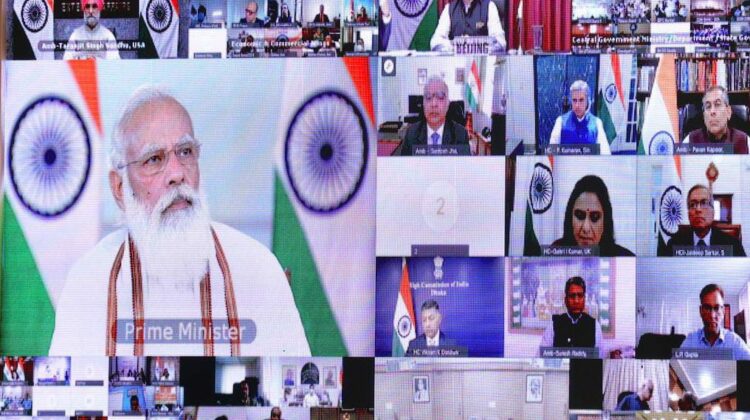 “At present our exports are about 20 per cent of GDP. Considering the size of our economy, our potential, the base of our manufacturing and service industry, it has the potential to grow a lot,” the PM said virtually addressing all Indian missions and export promotion councils on the target of achieving $400- billion exports in 2021-22.

Expanding on the four factors, Modi said that manufacturing has to be qualitatively competent as many consumers worldwide value quality more than price.

The Centre and the States would need to put in the effort to sort out the logistical problems, and it was also important for the government to move shoulder-to-shoulder with exporters. Most importantly, it was important to find more international markets for products made in India.

“When all four factors come together, India’s local will become global. Make in India for the world can happen,” he said.

Observing that a big part of India’s exports comprised items from just a handful of sectors such as petroleum products, gems & jewellery, engineering goods and pharmaceuticals and half the country’s exports were shipped to just four destinations, the Prime Minister said there was a huge scope for diversification and expansion.

With mining, coal, defence and railways opening up, “our exporters are getting more scope for growth and there is a need for drawing futuristic strategies for the new areas,” he said.

To mark 75 years of Independence, Modi asked mission heads to identify 75 new items that could be exported from India to their country of operation.

Modi also asked the Indian diaspora in different countries to get involved in the promotion drive and help boost exports of specific items from their States of origin. State governments, too, could select five-ten top priority goods and send them to at least 75 countries, he added.