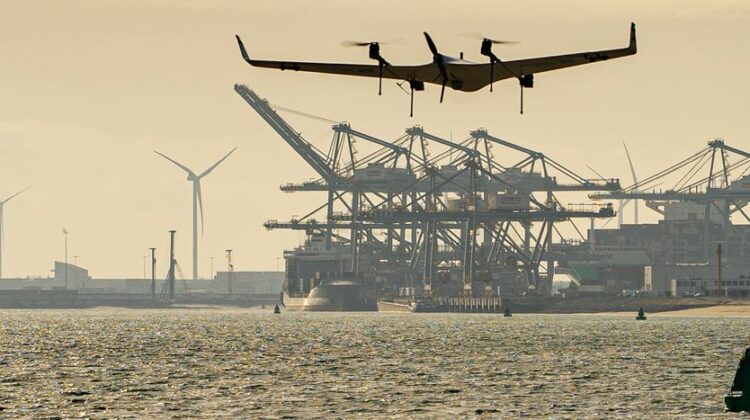 ROTTERDAM : The Port of Rotterdam has announced a successful drone pilot after a section of the quay at the Yangtze Canal was transformed into a drone port to demonstrate a long-range drone from the Dutch company .

The tests were conducted as part of the ‘Drone Port of Rotterdam’ innovation program and saw the port authority carry out several drone flights above Amailahaven, Arianehaven and Alexihaven. This pilot directly fits in with the ports ambition to test new technologies that make the port safer, smarter, and faster.

During the week of 25 October 2021, a live view of the drone images was streamed to assess the added value of the drone images in comparison to images from fixed cameras in the port. For this a construction site hut in a section of the quay at the Yangtze Canal was converted into a command centre and Avy station.

The Avy Aera drone that was tested is able to cover longer distances and reach higher speeds, ensuring the whole port can be covered with two to three devices, and in the event of an incident the drone can reach the location very quickly.

The next long-term drone operation will be conducted in early 2022 and will be see flights carried out on a weekly basis over a period of five months. In the coming months, the new Avy Aera V3 device will be used in combination with the Avy docking station. The drone station will then be installed at the Rotterdam Pilotage on the Pistoolhaven for testing, further expanding the flight zone.

The Port of Antwerp has previously partnered with aerospace company Sabca to conduct field trials of a fixed-wing drone fitted with cameras to asses the technology’s potential in providing real-time on-site security imaging. Announced in October 2021, the unmanned aircraft is able to remain airborne for more than eight hours and can take images using a powerful camera from a height of 280m