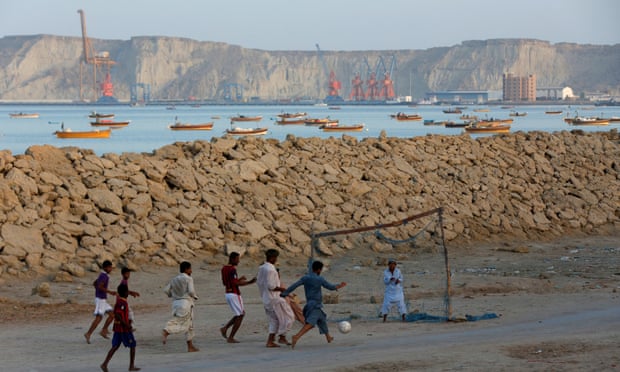 Demonstrations shut down Gwadar, where Chinese are blamed for lack of water and electricity and threat to local fishing

ISLAMABAD : Protests have erupted in Pakistan’s port city Gwadar against a severe shortage of water and electricity and threats to livelihoods, part of a growing backlash against China’s multibillion-dollar belt and road projects in the country.

This week, demonstrators including fishers and other local workers blocked the roads in Gwadar, a coastal town in Balochistan. They burned tyres, chanted slogans and largely shut down the city, to demand water and electricity and a stop to Chinese trawlers illegally fishing in the nearby waters and then taking the fish to China. Two people were injured when the authorities cracked down on the protesters.

On Friday a suicide bomber killed two children, in an attack on Chinese nationals driving along the main expressway to the port, according to a senior Pakistani official. “The suicide bomber was able to hit the last car of the convoy as it passed,” he said, confirming that two children died and a Chinese engineer was injured.

Responsibility for the attack was claimed by the Balochistan Liberation Army (BLA), which like other militant groups in the region accuses Chinese of exploiting Balochistan’s mineral resources, and has previously attacked Chinese nationals and the Chinese consulate in Karachi.

This week’s protests had been largely peaceful.

“It has been more than a month, we have been protesting and rallying against the Chinese trawlers, shortage of water and electricity. The government never paid heed to our demands, and we had to observe a complete shutdown strike and we were attacked by the district administration,” said Faiz Nigori, a local political worker.

The protests are part of a growing discontent with China’s presence in Gwadar, whose port is an integral part of the China-Pakistan Economic Corridor project (CPEC), in which China has invested billions in infrastructure projects in Pakistan.

Under the project, Pakistan surrendered Gwadar port to a Chinese-backed multinational corporation for a lease of 40 years. It is part of China’s mammoth belt and road initiative, which stretches across 70 countries to give China a clear trade route from east Asia to Europe.

The Pakistan government accepted China’s investment in the hope it would help boost the country’s ailing economy. But Balochistan is home to a long-running violent insurgency, and China’s presence in Gwadar has been the cause of much social unrest and led to great anti-Chinese sentiment.

It has also given a fillip to Baloch militant insurgent groups, who have carried out terrorist attacks in protest at CPEC projects. However, there are signs that resentment at belt and road is growing across the country. Nine Chinese workers were killed last month when a vehicle laden with explosives and driven by a suicide attacker rammed a convoy heading out to work on the Dasu dam, another flagship CPEC project.

China’s ambassador to Pakistan was also targeted in a terrorist attack on his hotel in April, though he was not hurt.

China is not to blame for the power and water shortages that have plagued Gwadar in recent weeks. Balochistan is Pakistan’s most undeveloped and most neglected region, and Gwadar is not connected to the national grid. It had instead relied on power from neighbouring Iran, but that has slowed to a trickle in recent weeks. Water has also become scarce after a dam dried up.

However, locals said they had been promised that China’s investment in Gwadar would mean development for the area, including the establishment of a coal-fired power station to provide much-needed electricity.

Yet, in the years since China was granted a lease on Gwadar port, no work has begun on any such projects and instead locals say that China’s presence is undermining their livelihoods and creating local food shortages by allowing Chinese fishing boats to illegally fish in Pakistan’s waters around the port.

Nigori said that when the Chinese started developing the Gwadar port, Pakistani officials claimed that the port city would become the Singapore of Pakistan. “But today, we don’t have water, electricity and Chinese trawlers are illegally fishing at our coast. We just want our basic rights,” he said.

Mir Sher Baz Khetran, a senior research fellow at the Institute of Strategic Studies Islamabad, said such protests could prove very destabilising for China’s presence in Pakistan. “If there is no trickle-down of development projects under CPEC, it will strengthen the insurgents’ narrative of exploitation of resources of Balochistan,” he said.

Last month, Pakistan detained five Chinese trawlers on suspicion of illegal fishing not far from Gwadar port. Khudadad Waju, the president of Fisherfolk Alliance Gwadar, said it had sent a team of local fishers to examine the caught fish and they confirmed that “the fish were caught near Gwadar”.

However, Chinese authorities denied that the detained Chinese trawlers were illegally fishing and claimed instead that they were sheltering from a storm.

Akbar Askani, the minister for fisheries for the Balochistan state government, alleged that the central government, which has close ties with China, was granting Chinese vessels licences to fish in the seas around Gwadar, despite the cost to the local community.

… as you’re joining us from India, we have a small favour to ask. Tens of millions have placed their trust in the Guardian’s high-impact journalism since we started publishing 200 years ago, turning to us in moments of crisis, uncertainty, solidarity and hope. More than 1.5 million readers, from 180 countries, have recently taken the step to support us financially – keeping us open to all, and fiercely independent.

With no shareholders or billionaire owner, we can set our own agenda and provide trustworthy journalism that’s free from commercial and political influence, offering a counterweight to the spread of misinformation. When it’s never mattered more, we can investigate and challenge without fear or favour.

Unlike many others, Guardian journalism is available for everyone to read, regardless of what they can afford to pay. We do this because we believe in information equality. Greater numbers of people can keep track of global events, understand their impact on people and communities, and become inspired to take meaningful action.

We aim to offer readers a comprehensive, international perspective on critical events shaping our world – from the Black Lives Matter movement, to the new American administration, Brexit, and the world’s slow emergence from a global pandemic. We are committed to upholding our reputation for urgent, powerful reporting on the climate emergency, and made the decision to reject advertising from fossil fuel companies, divest from the oil and gas industries, and set a course to achieve net zero emissions by 2030.

If there were ever a time to join us, it is now. Every contribution, however big or small, powers our journalism and sustains our future.