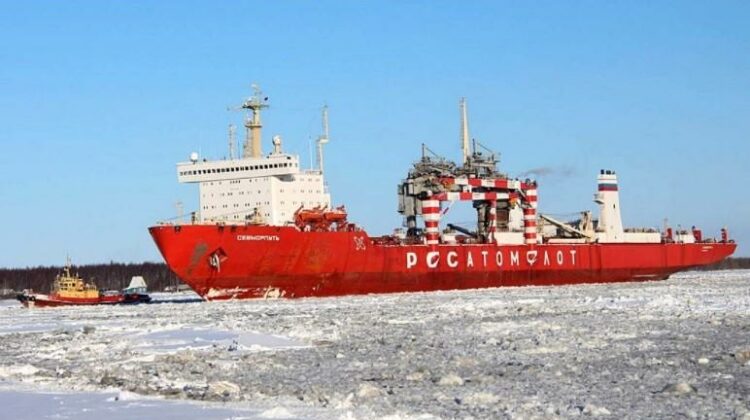 The route from St. Petersburg to Bangladesh via Murmansk and Vladivostok is about 3,200 nautical miles longer than sailing the cargo via the Suez Canal. Even the route around Africa would have been faster.

Putin aims to boost cargo transport in Arctic waters and Russia has for years promoted the Northern Sea Route, along the coast of Siberia, as “the shortcut between Europe and Asia.”

Putin aims to boost cargo transport in Arctic waters and Russia has for years promoted the Northern Sea Route, along the coast of Siberia, as “the shortcut between Europe and Asia.”

Operator of the ship, Russia’s state nuclear enterprise Rosatomflot, says the destination is Vladivostok, from where the cargo will be reloaded to another vessel for further transport to the Rooppur Nuclear Power Plant west of Dhaka, the capital of Bangladesh.

The voyage from St. Petersburg, around Scandinavia, and further along the icy Northern Sea Route to Vladivostok will take about 25 days.

“At present, waters are freezing to ice along the Northern Sea Route, but the technical characteristics of the vessel will allow it to pass the entire route without icebreaker assistance,” says Mustafa Kashka, Director of FSUE Atomflot.

He adds that the “crew is ready for the task” … and…” this is a responsible mission.

The 260-meters long “Sevmorput” is ice-classed and has years of experience from sailing to destinations in the Russian Arctic. Ice formation is already underway from the northern tip of Novaya Zemlya to east of the Wrangel Island, according to the online chart by the Northern Sea Route Administration. Voyages this time of the year take a longer time compared with sailing in open waters.

Not only is sailing north more difficult. This route also adds substantial time and distance compared to sailing the same cargo via the Suez Canal.

St. Petersburg to Bangladesh via the Arctic route and Vladivostok is 12.400 nautical miles. If sailing south, via the Suez Canal, the distance is 9,200 nm. Or 3,200 nm shorter.

Even sailing all south to the Cape of Good Hope, around Africa would likely be faster. That distance is 12,900 nm, but without icy waters and no need for reloading the cargo, the sailing time would be faster than the route “Sevmorput” now takes.

The Suez Canal Authority discourages nuclear-powered vessels from sailing through the canal but allows towed vessels to transit. Earlier this year, as an example, the aircraft carrier “USS Dwight D. Eisenhower”, powered by two reactors, passed through the Suez.

Russia’s “Sevmorput” is powered by one smaller KLT-40 reactor, similar to those on board the icebreakers “Taymyr” and “Vaygash” based in Murmansk.

According to Rosatomflot, the onboard equipment and materials to the nuclear power plant in Bangladesh amount to 1,400 tons. With a total capacity to carry 36,000 tons, the “Sevmorput” is far from being filled up and a much smaller ship could have sailed.

Likely, sailing the cargo to Rooppur nuclear power plant via Vladivostok with Rosatom’s own ship paid by the Russian state makes sense from an economical point of view.

The two VVER-1200 reactors and critical infrastructure at what will be Bangladesh’s first nuclear power plant are being built by the same Rosatom.

It is also Rosatom that is in charge of developing the Northern Sea Route and ultimately will be the one to answer for traffic to develop as ordered.