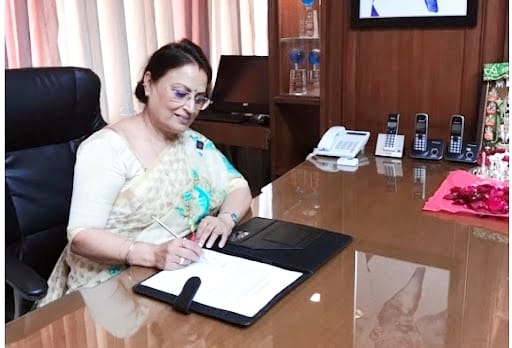 She said, “We are in the process of adding onto our fleet, we are in active negotiations with the sellers for the acquisition of two LPG carriers and if that fructifies before the end of this financial year, we should add it to our existing fleet of 59 vessels.”

On bulk trades, she mentioned, “The bulk is looking more or less stable with the economies having opened up. Bulk trade is always driven by China, so there is substantial stability in bulk trades and it is at an all-time high, reaching almost the rate of a decade back.”

She further mentioned, “Going by the orderbook globally, the tanker market is not doing well and there isn’t much of orders, a lot of scrapping is expected to be seen because of the IPO guidelines with respect to the low carbon footprint and these are going to kick-in in 2023 as well as in 2030.”

Mrs. Joshi also mentioned that the corporation’s liner segment is completely booked. She expects FY22 to be strong for all liner shipping companies.

In terms of revenue contribution, Mrs. Joshi adds that the liner segment contributes 18-20 percent to the total revenue while the tanker and bulk segments contribute 80 percent. She further mentioned that SCI has been impacted by low rates in the tanker segment.

On divestment, Mrs. Joshi clarified, “We are not involved at all in the data room process. The disinvestment is being done by the Indian government and not by the management of the company. The virtual data room for bidders has been opened and is being managed by the transaction advisor of the government of India, led by DIPAM.”