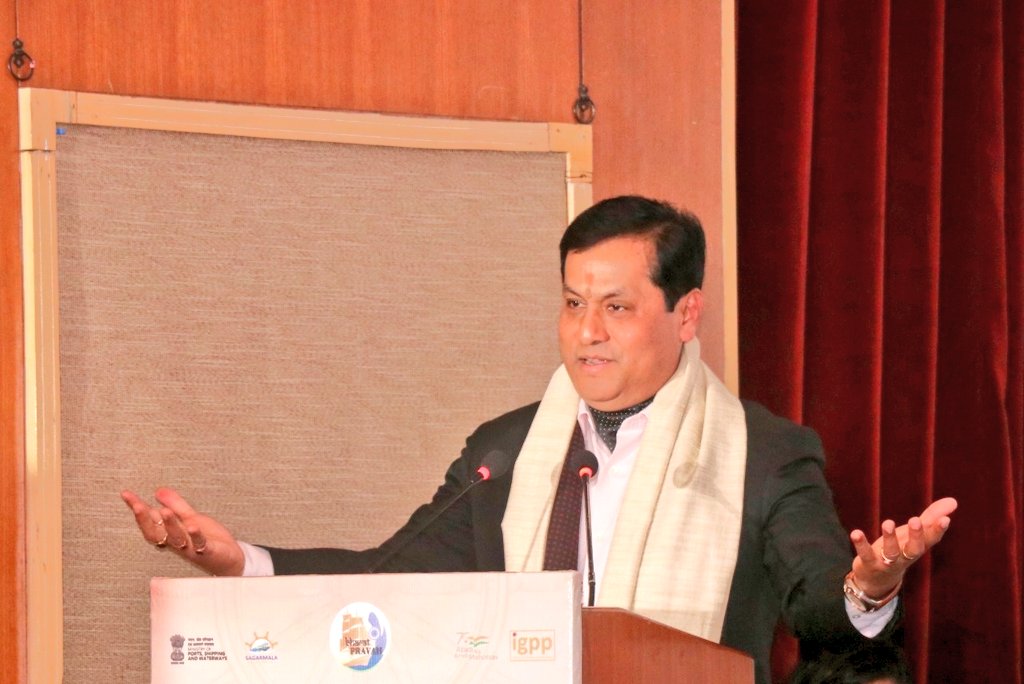 NEW DELHI : Rivers and seas should become part of the country’s social psyche, and people living away from them should also be reminded of their significance, said Shri Sarbananda Sonowal, the Union Minister of Shipping, Waterways, and Ports on Wednesday. He was launching ‘Bharat Pravah-India along its Shores’, an initiative to highlight the significance and imagery of rivers, ports, and shipping through a series of nationwide events.

“We are no longer concerned about riverbeds, and the cleanliness of our rivers as we have become used to running water from our taps. No longer are the songs celebrating our rivers, expressing our sorrows when they flood, and praying for seafarers’ safety part of our daily existence. Such traditions have remained limited to communities settled on riverbanks and coasts,” said Sonowal, elaborating on the thinking behind the initiative. The Ministry is organising Bharat Pravah in collaboration with the Institute for Governance, Policies and Politics, a think-tank.

Shipping Secretary Sanjeev Ranjan said that ports at Kochi and Vizhinjam in Kerala as well as Galathea Bay in Andaman Nicobar Islands have made some headway in the direction of becoming full-fledged transshipment hubs. This follows the Shipping Ministry’s call asking all ports to prepare a master plan to become mega ports by 2047. “Some of the biggest of ships pass through Galathea Bay, and we need to have a hub which serves ports all along the Bay of Bengal, not only for India but neighbouring countries of Bangaldesh, Indonesia and Thailand,” says Sanjeev Ranjan.

Transshipment hubs are ports that have connections to originating and destination ports. Currently, nearly 75% of India’s transshipment cargo is handled at ports outside India. The ports of Colombo, Singapore, and Klang handle more than 85% of this cargo, according to Ministry data.

In a panel discussion on the Future of the Development of Ports in India, Jawaharlal Nehru Port Trust Chairman Shri Sanjay Sethi pointed out that while India was looking to build mega ports which will be digitised and more environment-friendly, there are challenges along the way. “India does roughly 35% of containerization, while other developing countries do 62% to 65% containerization,” he said.

Dr. Ranjan agreed, saying, “Currently India does more break bulk shipping rather than using containers, however, we are making rapid progress towards containerization.”

Subrata Tripathy, CEO of Adani Ports & SEZ, said that along with advancements in port infrastructure, India’s share in world trade should also increase. “India’s share in world trade is a meagre 2%. Balance of trade is towards import,” said Mr. Tripathy. India stands at 44 on the logistics performance index. “This is an elephant in the room. The reason for low ranking is the absence of appropriate infrastructure and procedural reforms,” added Mr. Tripathy.