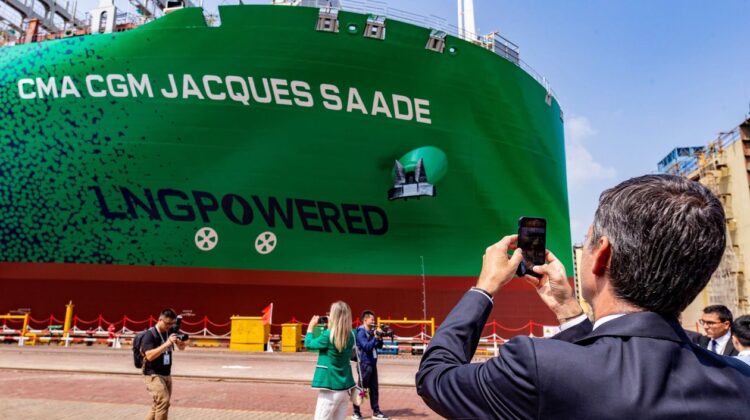 SHANGHAI : CMA CGM’s first LNG-powered container ship at its launch in Shanghai in 2019. Though liquefied natural gas pollutes less than oil, the World Bank said it would likely play a limited role in decarbonizing the industry and recommended that countries avoid new public policy supporting its use.

The maritime industry, under growing pressure to reduce shipping’s carbon emissions, is coming to a growing consensus that liquefied natural gas will provide an intermediate solution toward finding cleaner fuel to power ships.

Two of the world’s biggest container lines have ordered vessels that will operate with LNG, while Royal Dutch Shell PLC and Australian miner BHP Group Ltd. have been offering long-term charters to shipowners willing to build natural gas-fueled tankers and bulk carriers over the past year.

“The choice of LNG is now emerging as a mature energy solution, especially effective in terms of environmental protection,” said Mélanie Rigaud, a spokeswoman for France’s CMA CGM SA, which operates 13 LNG-powered container ships and is taking delivery of another 19 such ships by next year.

The focus on new fuel sources marks the biggest change in ship power since the sector switched from coal to oil more than 100 years ago.

The effort is aimed at meeting a deadline set by the International Maritime Organization, the United Nations marine regulator, to cut carbon emissions in half by 2050 compared with 2008 levels. Choices on measures to meet the target carry high stakes for ship operators, with shipping services provider Clarkson Research Services Ltd. estimating it may cost the industry more than $3 trillion to switch to new forms of power.

A raft of new fuels from ammonia and hydrogen to biofuels are being tested, but none is available in the volumes needed to power the world’s 60,000 ocean vessels and tens of thousands of smaller ships. Researchers are also working to create engines that can operate on ocean voyages with alternatives to fossil fuels. So far, only the U.S. and Saudi Arabia have formally pledged to work toward the IMO’s emissions strategy.

The work comes as the global maritime sector comes under growing regulatory pressure to clean up.

U.S. Special Presidential Envoy for Climate John Kerry said this week that Washington “is committing to work with countries in the IMO to adopt the goal of achieving net-zero emissions from international shipping by no later than 2050.”

He spoke ahead of a virtual climate summit President Biden kicked off on Thursday with world leaders in which he unveiled a new target for U.S. emissions reductions.

On Tuesday, the U.K. government issued a carbon-reduction plan that for the first time includes international shipping and aviation in the country’s efforts to reduce emissions.

Proponents of natural gas expect its use to become more widespread over the next decade and continue past the IMO deadline given the high cost of transforming to carbon-neutral vessels. The current order book for LNG powered-vessels stands at more than 139 ships, according to the IMO, with 27 ordered this year so far.

Martin Stopford, the nonexecutive president of Clarkson Research, told a shipping decarbonization forum this month that switching from the heavy oil fuel known as bunker to zero-emissions vessels could cost the industry more than $3 trillion.

Some $518 billion will have to go to upgrade container ships, he said, $509 billion to bulk carriers, $395 billion to gas carriers and $357 billion to cruise ships. Another $214 billion will be needed for oil tankers, $319 billion for offshore vessels and more than $900 billion for smaller vessels such as tugs and ferries sailing in coastal waters.

CMA CGM said six of its new LNG-powered ships, with capacity for 15,000 20-foot containers each, will operate at U.S. ports.

“These vessels will be highly efficient with 15% to 25% lower CO2 emissions,” said Tim Seifert, a Hapag spokesman. “We see LNG as a bridging technology on the way to carbon neutral fuels.”

Bulk-commodity companies like Shell and BHP are incorporating the vessels as they try to cut carbon emissions across their supply chains.

“If you want a long-term contract with a big client, one of the first things that will come up is how clean are your ships,” said George Lazaridis, head of research at Athens-based Allied Shipbroking Inc. “At this point in time, LNG-powered vessels are highly sought and if you have them, you are in good shape for a good chartering contract.”

Shell has so far chartered around 60 LNG-powered vessels including about a dozen that are still being built at yards, according to a person involved in the process.

Shell’s manager for downstream LNG, Tahir Faruqui, told the decarbonization forum that gas-powered vessels are a “no-brainer” and a “zero-risk investment choice” because regulators are working to tax or penalize carbon emissions.

The push toward LNG is hardly unanimous, however, and critics of natural gas as a fuel say shipping’s investment in the fuel could push back a drive to go fully green.

Denmark’s A.P. Moller-Maersk A/S, the world’s largest container line in terms of capacity, says it will opt for zero-emission alternatives to fossil fuels rather than choosing LNG as a bridging fuel for its fleet.

“We don’t believe that LNG will play a big role as a transition fuel because it’s still a fossil fuel and we would rather go from what we do today straight to a neutral type of fuel,” Chief Executive Søren Skou said in February. “We won’t order any new ships soon, because we still haven’t decided on future fuels. We would like to figure that out first and then build ships that would fit that type of fuel.”

In a report this month, the World Bank said LNG “is likely to play a limited role” in decarbonizing the industry and recommended that countries “avoid new public policy that supports LNG as a bunker fuel, reconsider existing policy support and continue to regulate methane emissions.”

The World Bank is a major source of funding for developing nations and its warning could make it difficult for those countries to secure financing for infrastructure to provide LNG for ships.