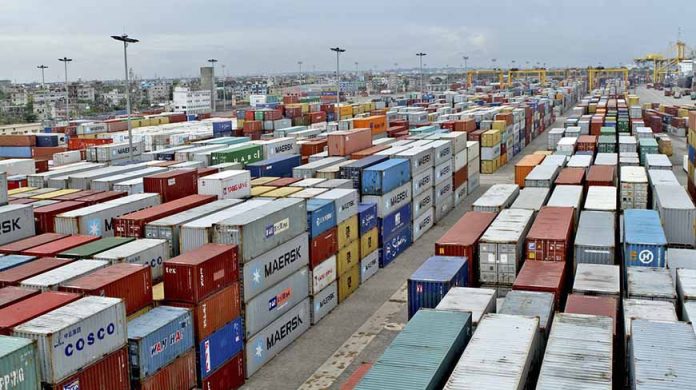 DHAKA : While outbound laden containers are piling up in depots, Chittagong port yards are full of boxes. At the same time, the vessels in Chittagong are experiencing severe berthing delays raising shippers and ship owners’ woe.

The average berthing delay of Singapore-Malaysian vessels now reached five days while some ships even waited up to ten days at the outer anchorage to reach jetties.

On 29 July, some 16 container vessels were waiting at the outer bar of the port while 11 more are loading and unloading boxes.

Ship owners said the priority berthing offered to vessels plying in Chittagong-Colombo route and the Bangladesh-flagged vessels to lower export backlog have come as a curse for vessels destined to Singapore and Malaysia transhipment points.

The berthing schedules for vessels coming from Singapore and Malaysia are repeatedly changed at Chittagong port prolonging their stay at the outer bar.

“This will create a chain effect as about 60% of export cargo and 70% of import cargo is connected from Singapore and Malaysia transhipment points,” said an official of a shipping company in Dhaka.

“The increased waiting time will certainly create another round of inbound backlog at those transhipment ports, let alone the majority export covered through,” he added.

The official termed the act of the port authority “priority berthing for Colombo route” as “most irrational” to make numerous carriers sufferer.

Amid the situation, the Bangladesh Shipping Agents  Association (BSAA) is going to write to the port authority to stop prioritising vessels in Chittagong-Colombo route and maintain the “first come first serve” policy since the backlog in Colombo route has gone down significantly now.

Muntasir Rubayat, head of operations at GBX Logistics, noted the port is giving priority to Colombo route vessels thus the problem is created. “One of my vessels got berthing after waiting seven days at the outer bar,” he said.

As of 29 July, 42,585TEU were lying at the Chittagong port yards out of its storing capacity of 49,018TEU while some 17 inland container depots were housing 55,742TEU against a storage capacity of 78,700TEU. At the same time, 12,295TEU of export laden containers were waiting for feeder vessels nominations at the depots.