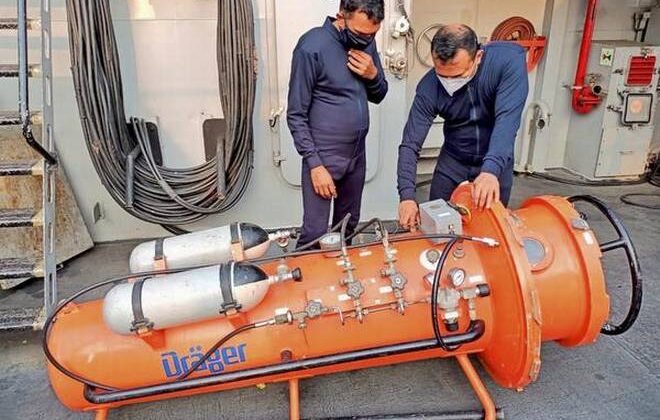 NEW DELHI : Six more bodies were recovered from the sunken Barge P-305 off Mumbai coast on Saturday, taking the toll death toll to 66, while nine crew are still missing even as the Navy deployed a survey vessel with specialised diving teams for underwater search. On the eastern coast, the Navy and Coast Guard augmented preventive measures for cyclonic storm Yass expected to form in the next 24 hours.

“Search and rescue operations continue for the remaining crew. Underwater search for the wrecks of Barge P-305 and Tug Varaprada using specialised teams and equipment is in progress,” the Navy spokesperson said. Specialised diving teams onboard survey vessel INS Makar with sonar and INS Tarasa sailed out early on Saturday morning from Mumbai for carrying out the underwater search, he stated.

So far, 186 crew have been rescued and 49 bodies have been recovered from Barge P-305, which sank 35 nautical miles off Mumbai with 261 crew on board on May 17 due to cyclone Tauktae.

As the low-pressure area in the North Andaman Sea is likely to intensify as cyclonic storm Yaas during the next 24 hours over the Bay of Bengal, moving in a north-westerly direction and likely to cross the coast between north Odisha and West Bengal around May 26, the Navy said it was closely monitoring the movement of the cyclonic storm.

“Eastern Naval Command and Naval Officers-in-Charge at the West Bengal and Odisha area have carried out preparatory activities to combat the effects of Cyclone ‘Yaas’, and are in constant liaison with the State administrations for rendering assistance as required,” the spokesperson said.

As part of the preparedness, eight flood relief teams and four diving teams were prepositioned at Odisha and West Bengal to augment the existing resources. Four naval ships are on standby with Humanitarian Assistance and Disaster Relief (HADR) blocks, diving, and medical teams to render assistance in the most affected areas along the Odisha and West Bengal coast, he stated.

Naval aircraft are kept ready at Naval Air Stations — INS Dega at Visakhapatnam and INS Rajali near Chennai to undertake aerial survey of the most affected areas, casualty evacuation, and air drop of relief material as required, the Navy added.