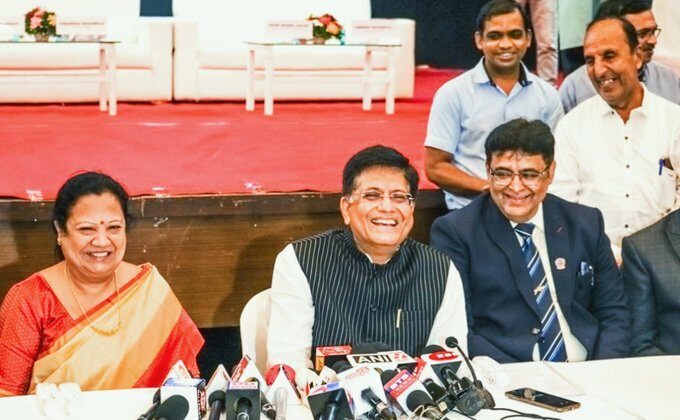 SURAT : Union Industries Minister Shri Piyush Goyal claimed that the government has limited role in this role to play in the demand-driven market after describing shortage of containers and the spiralling freight costs as an international phenomena in the post pandemic times .

He told that the government departments concerned are closely monitoring the situation and issuing necessary instructions to departments and he held meetings with railway and shipping ministries and discussed the issues and are looking into how they can play a role in cooling down the prices, they are also trying to bring transparency .

“After the second Covid wave there was a sudden increase in our exports and international trade. Therefore, the demand in India for containers as well as ships have increased,”
explained Goyal, who also claimed that exporters and various trade associations have flagged off the issue multiple times in the past six months.

In another query on exemption of pharma and chemical industries from Remission of Duties and Taxes on Exported Products (RoDTEP) scheme, Goyal said, “Only two or three sectors have been requested to bear with us for a certain period and they have been exempted.”

He expressed his happiness with the exporters on them being “so magnanimous that they have taken this gracefully” and that exports continue to rise. “India has never before exported 165 billion dollar between April to August.

Our exporters are trying to meet the high targets,” he said.

The minister further pointed out that many industries are being given significant support under the RoDTEP and Rebate of State and Central Taxes and Levies (RoSCTL) scheme as well. He said that the industry players have appreciated Prime Minister Narendra Modi’s efforts to reimburse indirect taxes.

“Covid has been a trying time for all of us and there is a greater need to put our resources into healthcare infrastructure, providing vaccines to all eligible at scorching pace. All of these require resources and only a few sectors have been exempted for certain time,” Goyal added.

The Union minister on a visit to the city on Friday participated in various events organised to mark the 71st birthday of PM Modi. After arriving in the city, Goyal attended a gift distribution ceremony for divyang children at the Disable Welfare Trust, and also examined a mega vaccination drive before he attended an interactive session with members of Southern Gujarat Chamber of Commerce and Industry. Goyal also visited Surat Diamond Bourse, textile industries in Sachin and an exhibition on achievements of PM Modi.