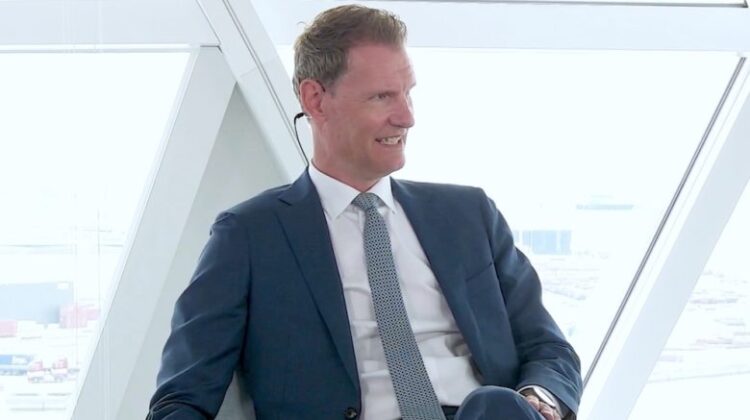 GENEVA : Nearly seven months into the job and Søren Toft is getting his views across this week. The CEO of Mediterranean Shipping Co (MSC) gave his first major international interview to the Financial Times earlier this week and then travelled to Antwerp for a keynote at the World Ports Conference yesterday.

Mr. Toft, headhunted by the Aponte family to run MSC’s container business after many years at Maersk, started in his role in Geneva in early December last year having served more than a year’s gardening leave.

Mr. Toft took a swipe at his former Danish employees in saying MSC was not concerned with setting green targets and timeframes, but rather the focus ought to be on assessing the best pathway for shipping to decarbonise. Maersk was one of the first shipping lines in the world to go public with its own decarbonisation targets.

“The big decarbonisation challenge will only be solved when we have carbon neutral fuels available at scale,” Toft said, adding that until such fuels come into place MSC is focused on energy efficiency improvements for its fleet in the interim.

“Our view is we need to decarbonise the world but our focus is less about setting a target and a time. We are fully dependent on the carbon neutral fuels so our energy, our time will go in to finding the right pathway instead of making a big declaration,” Mr. Toft said.

Mr.Toft suggested the International Maritime Organization’s (IMO) 2050 green goals will likely not be sufficient, but he remained steadfast in supporting IMO as shipping’s global regulator.

The MSC boss was vocal in his support of the International Chamber of Shipping’s $5bn decarbonisation research and development fund idea, currently under discussion at IMO. The initial amount of $5bn could be upped, Toft said, to $10bn or more.

“It really is research that we need to get to these goals,” Mr.Toft stressed. “We support the action rather than simply setting a target. Setting a target is the easy part of the work, the hard part of the work is to really together in the supply chain create the pathway. We believe a significant research and development fund under the auspices of the IMO could be one of those and then we’ll happily support all the IMO work in that direction.”

Toft would not be drawn on what fuels he reckoned would be the future fuels for shipping.

Toft was also quizzed about the ongoing supply chain pressure across the world.

Setting a target is the easy part of the work

“Shipping lines are part of the problem, but not the source of the problem,” Toft said, going on to discuss how in the early months of the pandemic demand for goods dropped dramatically before roaring back. Excessive demand and limited workforces on the land side thanks to Covid-19 had created today’s global container snarl-up, Toft argued.

For its part, MSC has started eight new mainline services and deployed another 80 ships to meet demand in recent months.

“I realise from a service reliability issue we must do better,” Mr.Toft conceded.

He went on to highlight how landslide infrastructure has been lagging behind, noting how port complexes in the US were becoming old, with restrictions on their ability to serve the ever growing size of ships.

Speaking at the same conference earlier in the week, Mr. Rodolphe Saadé, the Chairman of rival CMA CGM, said he did not expect container shipping to return to some form of normality until after Chinese New Year next year.