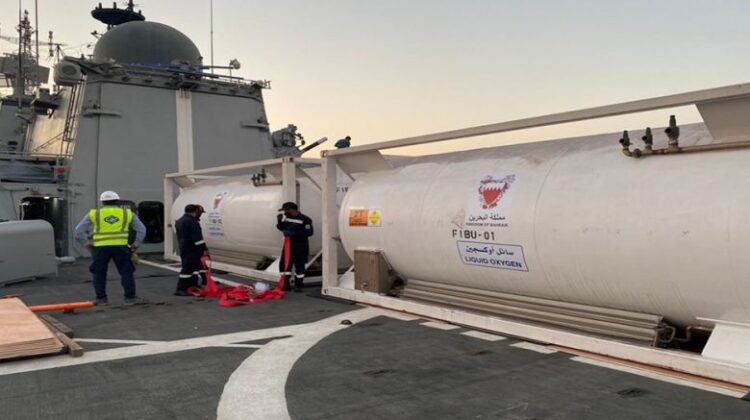 The other navy vessel INS Tabar carried 02 nos liquid oxygen filled ISO containers of net weight 20 MT each and 30 nos pallets of oxygen cylinders of one ton each.

The medical oxygen and concentrators are from the second tranche of medical aids donated by the Kuwait government to the Indian Red Cross Society. The cargoes were loaded on both the ships at Shuwaikh Port and sailed out on May 6. Including these two ships totally to date, four naval vessels have arrived at NMPT carrying medical oxygen and equipment under the Samudra Setu-II operation launched by the Indian Navy.

The two navy vessels were berthed on the highest priority and NMPT extended all its resources for berthing of the vessels and handling of five oxygen containers, 70 pallets containing oxygen cylinders and 02 nos of 10 litres high flow oxygen concentrators on zero charges as per the directives of the ministry of ports, shipping and waterways.

Chairman, NMPT, Dr AV Ramana, along with deputy chairman, KG Nath and senior officers of the Port, navy, coast guard, customs and district administration were present at the operation site to monitor smooth disembarking of the cargo off the vessels without any delays. State and district administration will decide on the further distribution of the oxygen tanks, cylinders and concentrators.