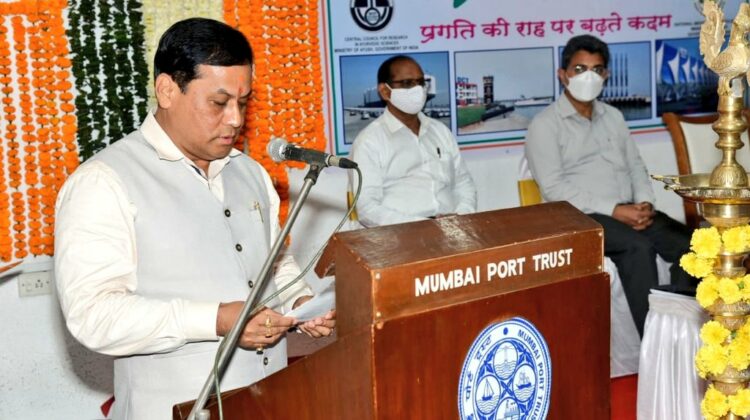 NEW DELHI : Union Minister for Ports, Shipping and Waterways Shri Sarbananda Sonowal on Friday reviewed projects at the Mumbai Port Trust during his visit to the facility, an official release said.

The minister also held a meeting with all heads of departments and other stakeholders.

Sonowal took stock of the infrastructure and upcoming projects at the domestic cruise terminal of Mumbai Port Trust which caters to domestic tourists to Goa, it added.

Mumbai Port Trust Chairperson Shri Rajiv Jalota apprised the minister about the salient features of the newly-constructed fifth oil berth, which is the largest berth in all major ports, with a capacity of 22 MMTP.

This project has been completed and is due for dedication to the nation, it said.

BPCL and HPCL informed the minister that the construction of the fifth oil berth has resulted in savings to the tune of Rs 200 crore so far to the national exchequer due to the avoidance of double handling.

Besides, Sonowal was apprised about other on-going as well as proposed projects at Mumbai Port.

Sonowal also took part in a special programme organised by the Mumbai Port Trust as part of the Azadi ka Amrit Mohotsav celebrations, according to a separate release.

Speaking about the relevance of Azadi Ka Amrit Mahotsav, he said, “Through this we will have to make our younger generation aware of the sacrifices made during the freedom struggle.” Sonowal also launched the ‘Ayush Aapke Dwar’ campaign from Mumbai by distributing medicinal plant saplings to citizens. This was as part of a national campaign launched by the Ayush Ministry on Friday, said the release.