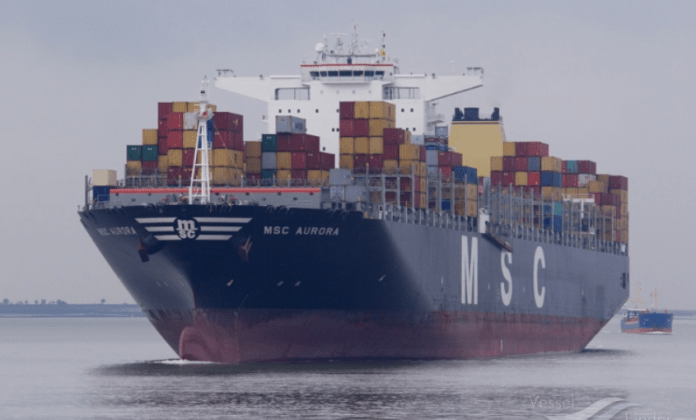 The US Environmental Protection Agency (EPA) has assessed penalties totaling US$81,474 against two commercial ships over inspection, monitoring, and reporting violations in California and Louisiana.

One of the two vessels was the 13,050TEU boxship MSC Aurora and the other one was the bulk carrier Western Durban. Both ships violated EPA’s Vessel General Permit (VGP) issued under the Clean Water Act (CWA).

From November 2016 to July 2021, the 20212-built MSC Aurora failed to conduct required routine visual inspections for 11 voyages to the ports of Long Beach, Los Angeles, and Oakland. MSC Aurora also failed to submit timely annual reports to EPA for 2016 – 2019. For these multiple inspection and reporting violations, Mediterranean Shipping Company, SRL has agreed to pay a civil penalty of US$66,474 under the settlement.

Furthermore, in August 2017, the Western Durban failed to perform monthly functionality monitoring and annual calibration of the ballast water treatment system before discharging ballast water at the Port of New Orleans. The ship also failed to conduct required biological monitoring after the discharge. EPA assessed penalties totaling US$15,000 to the Tokyo-based Victoria Ship Management company.

The violations were discovered in February 2020, as part of EPA and the US Coast Guard on-site visual inspections of the MSC Aurora and the Western Durban at the Ports of Long Beach and Los Angeles.

“Vessels that do not comply with their CWA permits can have significant environmental impacts to our waterways, including the introduction of invasive species,” said Amy Miller, EPA’s Enforcement and Compliance Assurance Division Director for the country’s Pacific Southwest region. “Failure to comply with the VGP requirements can result in significant penalties.”

Invasive species are a persistent problem in US coastal and inland waters, according to US EPA, while improper management of ballast water can introduce invasive species or damage local species by disrupting habitats and increasing competitive pressure.

Discharges of other waste streams regulated by the VGP (e.g., graywater, exhaust gas scrubber water, lubricants, etc.) can cause toxic impacts to local species or contain pathogenic organisms. Therefore, it is important that such discharges be monitored to ensure that aquatic ecosystems are protected from vessel discharges that contain pollutants.

Vessel self-inspections are required as a means of identifying, for example, sources of spills, broken pollution prevention equipment, or other situations that are or might lead to permit violations and allow the owner/operator to correct the situation as soon as possible, according to US EPA, which believes that self-inspections are required by the permit so that the owner or operator can diagnose and fix problems to remain compliant with the permit.