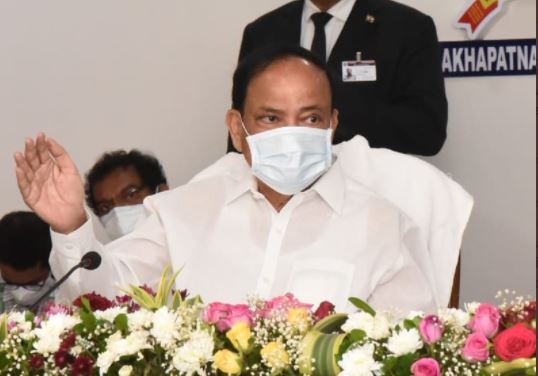 NEW DELHI : The Vice President of India, Shri M Venkaiah Naidu called for making India a leading maritime nation and emphasized the important role ports will have to play in achieving the ambitious vision.

Observing that India is strategically located on the world’s shipping routes with a long coastline of about 7,517 km and over 200 major and minor ports, he said “these ports play an important role in India’s economy.”

Recalling that ancient India was a great maritime power and that the navies of Chola kings and Kalinga kings used to rule over the oceans, the Vice President said “we have to regain that past glory”.

Touching upon the development of the port infrastructure in the country, he said that as part of the ambitious Sagarmala project, more than 504 projects have been identified to unlock the opportunities for port-led development and these initiatives are expected to mobilize more than 3.57 lakh crore of infrastructure investment.

Noting the decline in the cargo trend at Visakhapatnam port during 2020-21 due to the pandemic after a healthy upward swing between 2015-16 and 2019-20, the Vice President expressed the hope that the port would regain its growth trajectory once the situation normalizes. “It is important to note that ports will play an important role in post-Covid economic recovery”, he added.

Lauding the ports for having played a proactive role in handling oxygen supplies and humanitarian relief work during the second wave of Covid-19 pandemic and cyclones Tauktae and Yaas, he said “I compliment you all for that”.

Referring to the Maritime India Vision 2030, the Vice President wanted the Port to adopt global best practices in port operations and development. He said that the Vision-2030 is not impossible to achieve as India has the inherent strength of knowledge and wanted everyone to work together in the spirit of Team India.

During the interaction, the Vice President was keen to know the measures taken by VPT to contain pollution and protect the environment. Appreciating the Port’s green initiatives, he also wanted them to focus more on renewable energy and energy conservation.

He also appreciated Visakhapatnam Port Trust’s initiatives in creating world-class infrastructure, port-led industrialization, digitization of processes and various green initiatives for sustainability. “I am pleased to learn about the expansion plans of VPT in the coming years”, Shri Naidu added.

Earlier, the Vice President was apprised of the expansion plans of the Visakhapatnam Port, including the proposed establishment of a Rs. 406-crore Free Trade and Warehousing Zone (FTWZ) in an area of 103 acres.

The proposed FTWZ is to be funded under Sagarmala and a Special Purpose Vehicle (SPV) will be set up to develop basic infrastructure like roads, electricity, rail and road connectivity.